I had the best of intentions. I've begun a review of It Happened in Oklahoma and The Disagreement's review is brewing in my head. But, since the big storm ate a chunk of my roof after I had to drop my husband off for a trip to Norway, where a Coke costs $6 and luggage apparently disappears but reappears just as you begin to smell really gamey, I just can't concentrate very well. And, the Mother's Day promotions are really pissing me off. Plus, I've got to get that gardening done before it's too late, so I've been outside digging, weeding, pulling down vines, planting, watering, and apologizing to lizards.

Seriously, they're out there displaying, getting their lizardly groove on, and I keep yanking out their hiding spots. So I've been pulling out weeds and saying, "Sorry, sorry, sorry lizards." The mosquitoes are not apologizing to me. Nasty suckers.

I also have been outdoors with the camera. Who'd have thunk? So, this is a photograph and babble post, only. Warning, the following images are a little disturbing in an "animals chew on each other" way but they're also kind of cute - not gory. Still,I'll just babble a bit more, so you can be forewarned. The picture I'm about to post is a photo of a darling little chipmunk who has, hopefully, just had an epiphany and decided to turn his life around after being chomped (most of this sentence was stolen from Carrie, who is tremendously witty) and then dumped in the grass by the evil vampire kitty who once took a bite out of little old me. It was interesting, though, because the cat dropped the chipmunk and the little chippy froze -- literally, stood as still as a statue, so still that I was able to walk right up to it (and around it) to snap photos. So, this is a photo of cat acting nonchalant and chipmunk playing, "Maybe I'll get lucky and he'll go away." 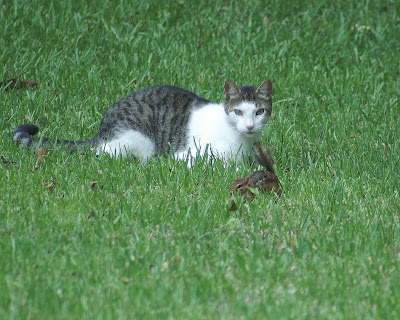 And he did, in fact, get lucky; I chased off the cat. When the chipmunk only ran partway into the bushes, prompting an attempted return by Vampire Kitty, I yelled at Chippy to "Run! Run! Run!" He took my advice. 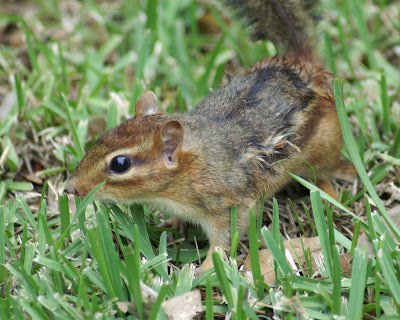 Oh, ouchie. You can relax, now. The rest is all easy.

A pretty I just planted: 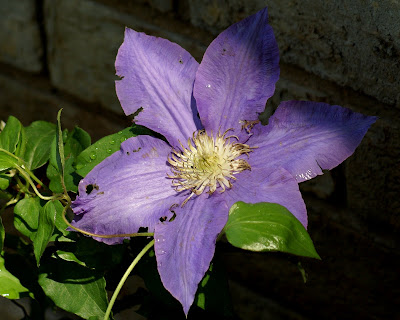 And, what happens when the teenager leaves his dresser drawer open: 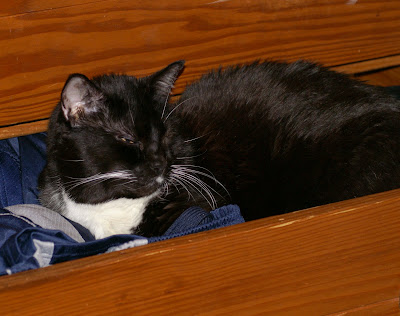 I love the OSEI's photo of the day (from yesterday). Actually, I just love satellite photos, but I thought this one was particularly interesting. It made me start singing, "Ain't it voggy outside!" Be glad you missed that moment.

Bookfool, off to take a nap
Posted by Bookfool at 10:10 PM