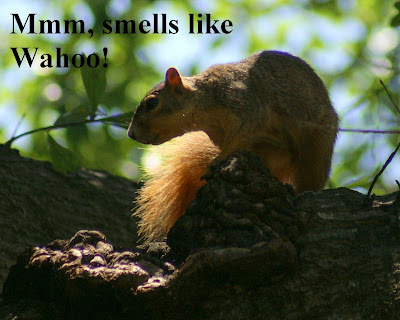 I really need my wahoos, this week. The lights are still flickering in our house and now it's gotten to the point that we often hear fizzing, popping, crackling noises. The refrigerator goes off and on, the computer monitors blink, the light bulbs are more lightning than light. Scary.

So, wahoo #1 -- Wahoo! for the fact that the electricity problem hasn't killed us, yet. Might want to follow that one up with a request for crossed fingers and prayers till we find an electrician.

2. It rained cats and dogs, this morning, and I had to drive on Interstate 20 to Jackson in a deluge. It was just a wee bit bracing. Fortunately, all went well apart from one brief moment during which an 18-wheeler passed me and I was temporarily blinded by the splash he generated. Well, wahoo! for making it home in one piece.

3. You can't help but love this wahoo if you're a bibliophile (and which of you is not?) . . . Wahoo! for that ARC giveaway at the library. Oh, oh, oh, oh!! I'm so excited to have a fresh, pretty pile. I'll have to take some photos, soon. Both hubby and I are having fun with the new books. But, my most thrilling find on those library carts -- and, I'm telling you, it is such a lucky thing that I held that wahoo noise in because they would have kicked me out faster than you can say, "Gosh, look at the greedy book pig" -- is The Sugar Queen by Sarah Addison Allen. Garden Spells was one of my favorite reads, last year, so I've been just salivating at the thought of another luscious read by the same author, ever since a friend told me she'd received an advanced reader. You have never seen an arm move as fast as that motion I made to snatch The Sugar Queen off the FREE books cart. 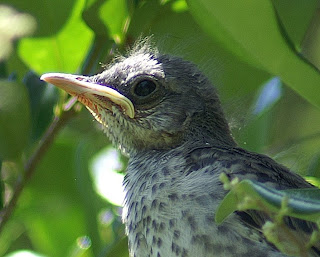 4. Wahoo! for new life. I meant to mention this little guy, whom I plunked into my sidebar, last week, but then events intervened. Gah, small-town weirdness that I can't talk about, but it's mostly over. Anyway, I was standing out on our driveway, one day (I do that a lot, just watching the birds) and a mockingbird was dive-bombing Gray Kitty, the cat whose image I've just turned into my new profile photo. Naturally, I started to think, "Hmm, maybe there's a nest, nearby." The next day, when I was outside I noticed a nest in a big green thing -- which is either a big shrub or a small tree; honestly, I can't tell. It's just fat and leafy. And, there was a whole lot of tweeting going on. So, I walked across the street and saw this little fellow hanging out of the nest. Up above on the wire was either Mama or Daddy Mockingbird with a mouthful of blackberry. What an awesome sight. Look at that cute, downy little head!!!! And here's Mama or Daddy: 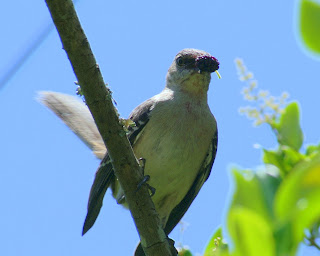 5. I signed a contract with a roofer, last week. I told my husband the roofer is very soft-spoken and likable and he has these nice little smile crinkles around his eyes, but I have no idea whether he's any good at replacing a roof. My husband just laughed. So, you know, wahoo! for having a husband who trusts me and thinks I'm kind of funny. I think I'd probably drive most men crazy, so that's a biggie.

I had this overwhelming need to actually buy a new book, over the weekend, and The Blood of Flowers has been on my wish list for quite a while, so I grabbed that one on a jaunt to Borders. I have no idea when I'll actually read it, but it's very pretty and comes highly recommended.

And from our library's perpetual sale, I got a copy of Angle of Repose by Wallace Stegner. Squeee! I've had that one on the wish list forever -- like, years. Again, when I'll get to it is anyone's guess, but I'm happy to own a copy. I love Stegner.

I was also thrilled to see a message saying I've won a copy of The Used World by Haven Kimmel from This Book for Free. I've been planning to give her fiction a try and that'll make it easy. Many thanks to Shoshana!

Wishing everyone a deluge of wahoos,

Bookfool, aka That Greedy Book Pig
Posted by Bookfool at 5:26 PM