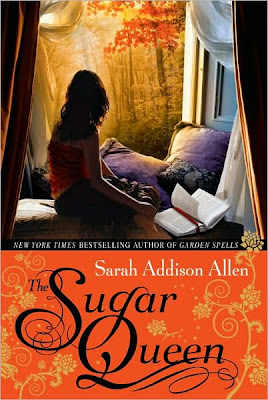 She looked over to the door and locked eyes with Jake. The force of it nearly knocked her over. As much as Julian could do, as much as he wanted to do, he could not affect her the way Jake could. It was the difference between a tickle and a punch.

Jake walked toward her, Adam on his heels. They got caught in the group of shiny women on their way. Walking through that group was like walking into a sudden dust devil. They emerged on the other side looking rumpled and windblown. [pp. 109-110]

"Books can be possessive, can't they? You're walking around in a bookstore and a certain one will jump out at you, like it had moved there on its own, just to get your attention. Sometimes what's inside will change your life, but sometimes you don't even have to read it. Sometimes it's a comfort just to have a book around. Many of these books haven't even had their spines cracked. 'Why do you buy books you don't even read?' our daughter asks us. That's like asking someone who lives alone why they bought a cat. For company, of course." [p. 180]

What led you to pick up this book? I loved Garden Spells, by the same author, and was fortunate (as in "Wow, this is like winning the lottery!" -- it's the simple things in life you treasure) to find an advanced reader copy of The Sugar Queen for free at my public library.

Summarize the plot but don't give away the ending. Josey Cirrini was a terrible brat, as a child and, at 27 years of age, is still trying to make up for her early years by caring for her elderly widowed mother, Margaret. More than anything, Josey desires to escape from the Bald Slope, North Carolina, where her wealth and her history are known to everyone. From a distance, Josey admires her handsome mailman, Adam, but she's not really allowed any social life and is totally inexperienced with men. To assuage her frustrations, she frequently hides in her closet and eats from her stash of candy and goodies. Then, one day she opens the closet and finds Della Lee Baker sitting on her closet floor. Shocked at first, Josey allows her to stay and even offers to bring her food. Della Lee sends Josey out for sandwiches from a shop at the courthouse. As Josey and shop owner Chloe Finley become friends, Josey slowly gets up the nerve to leave the house more often. There are quite a few threads that eventually interconnect and the story is really about three women whose lives are intertwined and who must all learn to be true to their own hearts.

What did you like most about the book? Golly, everything. It's just a lovely, heartwarming, witty, magical tale. I think the author has a way of creating incredibly warm characters with some sort of magical abilities. Chloe, for example, attracts books; they magically pop up nearby and even sometimes follow her around. Josey is a really nice person, much more of a social creature than she realizes after years of doing little but serving her bitter mother. She always senses the mailman's presence as he arrives at her house. The housekeeper is funny and charming with her superstitious ways and has her own special ability, which doesn't become clear until late in the book.

What did you think of the characters? Wonderful, wonderful characters. I felt like they all made sense in light of their pasts. The author has a way of making characters that are so likable that you can't help but think, "I just know I could be friends with that author if I knew her. I'll bet she's nice." Don't worry; I'm not a stalker.

Share a favorite scene from the book: I particularly loved the scenes in which Chloe was chased around by books like Finding Forgiveness. Chloe would tell them to just leave her alone, but then she'd walk into another room and whatever book wanted her attention would pop up, again. In one scene, an entire stack of books practically stalks her, inching their way into the bathroom.

In general: The author has officially become a personal favorite with this second delightful book.

Now reading:
Mrs. Lieutenant by Phyllis Zimbler Miller (just started!)
Eat, Pray, Love by Elizabeth Gilbert (the second section isn't keeping my attention, but we'll see)
The Queen of Sleepy Eye by Patti Hill (crazy about this one, so far, and hope to find more reading time to spend with it, soon)

Oh, I almost forgot! Since The Sugar Queen is set in North Carolina (and so is the author -- I mean, she lives there), it qualifies as book #2 for the Southern Reading Challenge. Woohoo!