The Disagreement by Nick Taylor 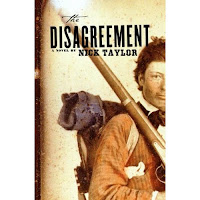 What led you to pick up this book? It was sent to me for review by Simon & Schuster.

Summarize the plot but don't give away the ending. John Muro's father was first a physician and then made his fortune as a manufacturer of clothing. Upon the outbreak of "the disagreement", aka the Civil War, the elder Muro acquires an order for uniforms that should keep the family in good circumstances. Young John Alan, however, is disappointed to find that he will now be unable to attend medical school in Philadelphia. Send to a school in Charlottesville, Virginia instead, John finds himself swept into tending the war wounded and mesmerized by a beautiful young woman named Lorrie. As the Civil War rages, John and Lorrie are oddly insulated from its effects. John continues to do his doctoring, while his family's fortune crumbles to pieces and he falls madly in love.

What did you like most about the book? I liked the time period. I've probably read another Civil War novel (I've definitely read some non-fiction) but at the moment, I can't recall a single title. It was a nice change of pace. It also was nicely written, with an easy flow.

What did you think of the characters? The characters were none too likable. John Muro is utterly wrapped up in himself, his girlfriend and his work. But, his work serves only to inflate his own ego. If you really sit back and analyze the book (and I'd love to talk to more people who've read this one), it appears that John is not only inured to the sights, sounds and smells of the wounded that he treats but totally unable to step outside himself for even a moment. He comes off as slightly inhuman, extraordinarily egotistical, maybe even cowardly. His reaction to his family's plight baffled me.

Share a favorite scene from the book: There's an interesting scene in which Lorrie puts on a bit of a feast for the doctors. My husband knows his history better than I do, so I asked him if he knew anything about whether or not such a thing might have really happened -- the idea that someone finagled food from the farmers to put on a fancy dinner. He said yes, "but only the amongst the really wealthy."

3/5 - I can't say this was more than an average read, simply because the protagonist was so totally untouched, emotionally and physically, by the war. There was never any real sense of deprivation, anguish, loss, frustration . . . there wasn't a lot of emoting, really, apart from a bit of love angst and worry about his schooling. Also, there was never any concern about how he was going to pay for his schooling, when his family fell upon hard times. Perhaps his job was meant to pay for his classes but I don't believe there was any mention of that, nor any concern on John's part.

In general: Nyeh, nothing great. The Disagreement read a little bit like it was written by an English major who crammed on his history in the library and found a few interesting tidbits around which to revolve his plot. That sounds awful, but the writing flowed. I'm not sure I found it totally believable and I disliked the lack of emotion -- I didn't like John Alan Muro at all, in fact. There were several times that I recall thinking that if I knew him I'd kick him in the shins. But, believe it or not, I enjoyed the book and I'm glad I read it. It just wasn't anything to get excited about.

Next Up: A review of Defining Dulcie by Paul Acampora. I've decided to skip reviewing It Happened in Oklahoma, although I may do a mini-review, later on. I've also finished An Irish Country Doctor and am reading An Irish Country Village, but I'll review those as a set for Estella.

Speaking of Which: I completely forgot to post a link to the latest Estella issue, mostly because I haven't yet read it. But, I will. It's always wonderful.

Hope everyone has a terrific weekend! I'll be fetching the husband from the airport. Wahoo for that!

Bookfool, who prefers having the husband under the damaged roof with her.
Posted by Bookfool at 12:46 PM