Slightly Early Wahooey Stuff (unless you're living in my future, aka another time zone)

One more reason lizards are cool, in case you haven't gotten enough of my anole lizard buddies, lately: 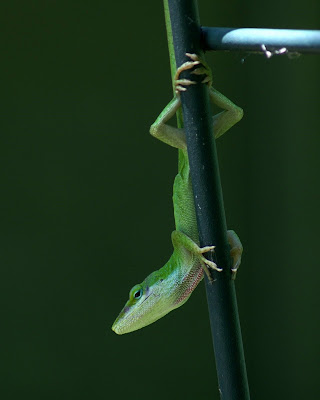 Oooh, I want to hang upside down and grin while I'm at it! How wahooey is that?

Today, I read the intro of Beyond the Mommy Years: Empty Nest, Full Life by Carin Rubenstein, which a friend sent to me (thank you, Lover of Books!) bought a copy of The Diamond Age by Neal Stephenson in the library sale and hired a roofer to replace the roof before it falls to pieces (bits keep flying off -- we've had an awful lot of storms, this year). I'm really quite proud of my roof. It survived Hurricane Katrina. Good for you, roof; you did your part. When I first opened the door to my roofer, Ronnie, he looked waaaaay up at our two gigantic oak trees and said, "I'd be scared of those trees." Well, they do have a tendency to fall over, around here. But, I told him I figured we'd just be goners if they did, so I don't bother thinking about it.

I didn't get around to Weekly Geeking, although I still have the best of intentions, but I'm all about environmental issues: global warming, saving the rainforests and the polar bears (because it's a bad idea to plunk the polar bears in the rain forest, we keep these two mentally separated, although they're really interconnected), planting trees and subsistence-only whaling, etc. And, I noted this comment in the Alaska Newsreader:

"The ice is melting three weeks earlier in the spring than it did 20 years ago, and it's re-forming a month later in the fall," said Carleton Ray of the University of Virginia, who has studied walruses since the 1950s. "There's no question that these changes are very bad for walruses."

And, on the other extreme of life (the exterminating end), I kicked the anthill to see if the fire ants have expired. They're sluggish, but aren't we all? It's hot out there. Still, they're alive so it's possible that the old home remedy won't work. I'll give them another package of cheese grits before making any judgment calls. Maybe their absence will be a future wahoo.

My youngest son is now officially employed as a lifeguard (Wahoo! for the teenager having a job) and I'm not quite ready to let him drive himself to the pool alone, so afternoons involve a lot of zipping back and forth to and from the pool. I'm driving our 18-year-old Honda Accord on pool and school runs. It's the most fuel-efficient vehicle on the Lizard Central Parking Lot and the car the youngster is most comfortable driving when he takes the wheel (with Mom in the passenger seat, of course). I love that car; it's got pep. Never mind the fact that little bits and pieces are falling off because it's elderly. It's your health that counts, even if you're an automobile. Wahoo! for a nice old car that runs like a dream.

The kiddo won't let me photograph him, these days, but I recently sneaked in a photo of his hair. Doesn't he have great hair? Very wahooey hair, if you ask me -- it's auburn and wavy with streaks of blond from sun exposure. 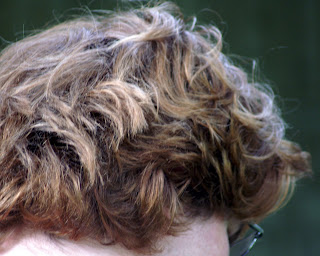 I haven't gotten back to it, but my friend Mike, a very wahooey email pal with whom I exchange lists of books read, finally tipped the scales with his enthusiastic recommendation of Eat, Pray, Love by Elizabeth Gilbert. So far, I'm really enjoying it. Mike doesn't read blogs or I'd send him a virtual smooch. I've decided that my reading is taking a terrible turn towards Attention Deficit Chaos, though, so I'm going to focus on finishing Moonstruck by Susan Grant before I read another page of anything else at all. Sometimes I just have to tell myself, "Focus, lady, focus." 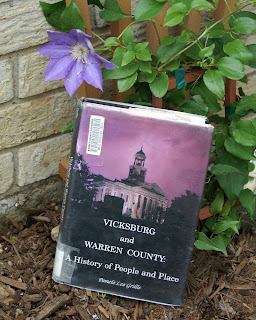 Vicksburg and Warren County: A History of People and Place by Pamela Lea Grillis -- Book #1 completed for the Southern Reading Challenge -- is probably not of interest to many of y'all, so I'm going to skip reviewing it and return it to the library. But, there are a couple of quotes I have to share because they made me chuckle:

To populate the Yazoo plantations, the French sent peasants, slaves, tramps, prostitutes and anyone out of work for more than four days in France. [p. 27]

In fact, in 1827, a Baptist minister, Zebulon Butler, had visited Vicksburg with an eye toward establishing a ministry there. After less than a year, Reverend Butler had fled, aghast at the "lawless immorality" he had encountered. Indeed, Vicksburg was a wild, rambunctious town of singular personalities at its beginning. [p. 40]

Things have changed a bit. We have a lot of Baptists, now. Wahoo for that, eh?

Must go read before I babble so long that it really turns into Wednesday on our side of the globe.

Bookfool, who used to be able to walk upside-down on her hands but is so over that, doggone it
Posted by Bookfool at 6:58 PM