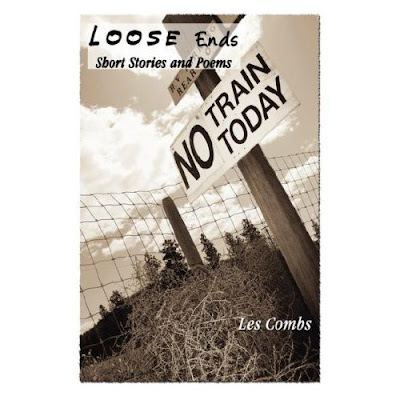 What led you to pick up this book? The author is a friend of a friend. I've read some of his stories, in the past, and enjoyed them. So, when my friend Cindi asked if I'd be willing to read and review the book, I jumped at the chance.

Summarize, if you would please, without giving anything away. Since the book is a collection of Les Combs' short stories and poems, I'll summarize a few favorites:

Harry B: A reporter assigned to interview a group of devil worshipers invading Arkansas meets with an awkward fate.

Amana from Heaven: A man whose death was caused by a falling refrigerator finds himself in an interesting heavenly predicament.

Tumbleweed: After his wife kicks him out and ends up with most of their possessions, Custis takes off on a hitchhiking journey. When the story opens up, Custis isn't certain whether he's in Kansas or Oklahoma, but he's certainly found trouble. And, trouble follows him wherever he goes. This story is worth the price of the book; it's a riot.

That Woman: A recently widowed man who was happily married for many years finds himself hoodwinked into a second marriage and meekly allows the new wife to alter his life until she goes one step too far.

What did you like most about the book? There were quite a few stories that made me smile or chuckle. I love a clever, surprising, smile-inducing story. A book full of them is even better.

What did you think of the characters? They were a varied lot and I had a few particular favorites, but there's a wide enough variety that they can't be easily described in one paragraph. Better to read the book. If I had to choose a couple of favorites, they'd be trouble-magnet Custis and the widowed Walter.

There's a lot of sky over west Texas with not much of interest under it. -- Tumbleweed

You see, it's all on account of a woman. I never met anyone like her in my whole life, and now she's gone. Walked right out that door over there and left me trying to fix a broke heart by pouring Budweiser on it. -- Scars

Irvin had acquired a look of panic surrounded by desperation with a touch of terror. -- The Ceremony

Thumbs up, 4/5 - I really enjoyed the stories in this book. Poetry is a hard sell for me, so admittedly I paid more attention to the stories than the poems; but, I found the storytelling witty and the author often takes the reader in totally unexpected directions. I love that.

In general: I think Loose Ends would probably fit into the "Southern Lit" category, as many of the stories are set in Arkansas or thereabouts. Both dialogue and narrative often have what I would term a "down home" Southern influence without falling so heavily into dialect that they become annoying.

Next up: Reviews of
It Happened in Oklahoma by Robert L. Dorman and
The Disagreement by Nick Taylor.

Just walked in the door:
Moonstruck by Susan Grant (Squeee! Thanks, Susan!!!)
Demons Are a Ghoul's Best Friend (Thanks, Tammy!!!)

Warning: If you don't like being stared at and you aren't fond of reptiles, this photo might creep you out. 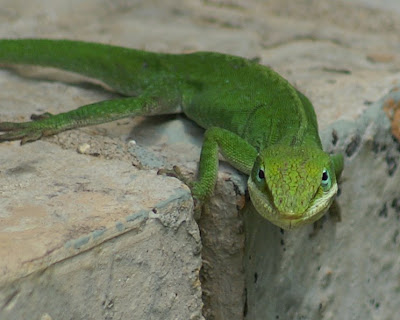 Wowee, talk about a direct gaze.
Posted by Bookfool at 6:58 PM