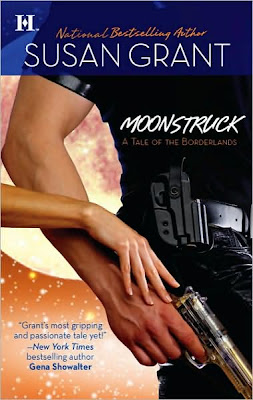 [Finn] walked to a comm panel to assemble his team and sat down. The smart chair sank almost to the floor before rising to the height he'd programmed. Blast the damn thing! "Do that again, and out the airlock you go," he muttered. Was it his imagination or did the chair give an extra jolt?

Only a few amused glances veered in his direction. He altered the settings -- again. No matter what he adjusted, the so-called smart chairs did something else.

What led you to pick up this book? The author sent me a copy. One of her previous books, Your Planet or Mine? was on my 2006 list of favorites reads (see my review, here).

Summarize the plot but don't give away the ending. As a young adult, Brit "Stone-Heart" Bandar witnessed mass murder at the hands of the Drakken Horde. Since that day, she has made it her mission to eliminate as many of the Drakken Horde as possible and has become an admiral in the Coalition fleet, fighting the Horde and attempting to catch rogue captain and pirate Finn Rorkken. When the Coalition and the Horde draft a peace accord and become part of the new Triad -- which includes the Coalition, the Horde and Earth, Bandar and Rorkken are thrown together, obligated to share command of a new space ship and forced to fight their unexpected attraction to each other. When mass murder on a remote planet near the Borderlands throws the light of suspicion on the Drakken Horde, peace comes into question and Brit has no choice but to face the fear and anger that have lingered in spite of her determination to move on.

What did you like most about the book? I liked the action, the characters, the raw emotion and the author's unique brand of humor. While this book is much darker than the previous book I read by the same author, she still managed to sneak in plenty of offbeat, funny moments.

What did you think of the characters? The hero and heroine are both strong characters, strict military leaders who are admired and respected by their crews. Brit's nickname indicates the fact that she's known as a cold-hearted leader. But, both Brit and Finn have their soft spots and have a sweet vulnerability when it comes to each other. There's also a secondary romance and I liked the characters involved in that little love triangle, as well. Actually, the secondary storyline was slightly a tiny bit more appealing because the heroine was such an innocent, naive young lady that you couldn't help but root for her to choose the right fellow.

Share a favorite scene from the book: I particularly love all of the action scenes, when Bandar and Rorkken turn completely serious and are focused on nothing but the mission at hand. Susan Grant's military history is no doubt at least partially responsible for her ability to write crisp, fast-paced action. I also enjoyed the tension and urgency when one of the characters fell victim to a booby-trapped space ship.

Thumbs up - Adventure, love and some rocking fine outer-space action, heavy on the romance. Once I became involved with the characters, I had difficulty setting the book down.

In general: This is only my second book by Susan Grant, so I found myself comparing it to Your Planet or Mine? and I prefer a funny, light-hearted action/adventure sci-fi romance to a darker version of the same. But, I still loved the book. I like the author's sly sense of humor, the worlds that she creates (including all the nano-this and nano-that technology), the characters, the action and adventure. There is more emotion in Moonstruck and less humor, but it's still a terrific blend and I enjoyed it. My only quibble would be that some of the more erotic wording (and Moonstruck is quite heavy on sex scenes) is offensive to me. To regular romance readers, it may not be.

Also, it's worth noting that Bandar uses sex as a defense mechanism. So, the book begins with the admiral in the midst of a paid encounter (and there are quite a few graphic sex scenes). I would say it's not family-friendly, for that reason. But, let's face it, I'm a real priss.

Something to think about: In this particular storyline, sex is crucial because the heroine uses it to keep herself from becoming close to men and, thus, avoid vulnerability. Because it's important to plot, I think the sexual tension and relationship firmly entrenches this particular novel in the "romance" category. And, yet, it takes place in outer space. You simply can't deny that the sci-fi aspect is fantastic and I do think a lot of authors who write excellent sci-fi end up finding their books unfairly categorized as romance rather than science fiction. Not long ago, I recall reading an entry to that effect by another blogger (sorry, I did not save a link) who agrees that some tremendous sci-fi is unfairly plunked in the romance section by publishers. In fact, that particular blogger said she goes so far as to move a particular author's books from the romance section to the sci-fi shelves, where the books will presumably get more exposure.

The question for publishers and readers: Does romance negate the impact of setting? I have a friend who believes that romance is often thrown into a novel because it's a common -- possibly even expected -- technique, adding a subplot involving romance and, in effect, watering down a perfectly decent plot line. I don't know his opinion as to whether the romantic storyline should impact categorization.

Personal opinion: I like a little romance (preferably without graphic sex scenes) in just about anything. Sometimes I agree with my friend; there are stories in which the romantic aspect seems contrived and totally out of place -- and I'm referring to both genre and literary novels. But, I think love and attraction are a fact of life. It's nearly impossible to toss more than a few people/characters (real or imagined) together without some sort of romantic tension between at least a few of them. And, in many cases I think the setting should rule the classification. In fact, I would prefer that books by Susan Grant, Linnea Sinclair, and others who add a heavy romantic touch, were shelved in the sci-fi section. If I'm in the mood for sci-fi, that's where I'm going to go. Add the word "romance" to the spine, if you'd like; but remember that it's really the setting that often guides the impulse to read a particular book.

Back to Moonstruck . . .It is definitely recommended by moi and I am totally annoyed with myself for having misplaced my copy of My Favorite Earthling, which continued the story of Reef from Your Planet or Mine? Now, I'm just dying to read My Favorite Earthling.
Posted by Bookfool at 2:07 PM