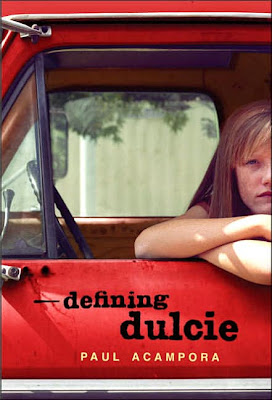 As we rolled out of town, Mom gripped the steering wheel like she was trying to strangle a chicken. I stared into the passenger-side mirror at my grandfather growing smaller in the distance. Then I watched the suitcases and cardboard boxes piled high in the bed of the truck. A flap on one carton started to blow loose, and just as we made a sharp left-hand turn onto the interstate, the box burst open. Stockings and socks and underwear, both mine and Mom's, sailed into the breeze. "Dulcie," Mom said, unaware of the undergarment parade behind us, "it's going to be okay. We're going to be all right."

"Maybe," I said, "but we're not going to be comfortable."

"It looks like we've reached the part of the project often referred to in technical terms as the what-the-hell-have-we-done-moment."

"Dulcie," said Frank, "I think you're confusing normal with reasonable."

I went back to the dictionary. "Reasonable. Being within the bounds of common sense. Rational. Not excessive or extreme."

Frank took the book from my hands. He flipped to a new page and read out loud. "Mother. A woman who conceives, gives birth to, and/or raises a child." He looked up. "There's nothing in there about normal, rational or reasonable."

"Give your mother a break," said Frank, "and/or remember that she's had just as tough a year as you."

Defining Dulcie tells about a 16-year-old girl whose father has recently died. Dulcie's mother impulsively decides to sell just about everything she and her daughter own and move to California to start a new life, presumably with the intent of also abandoning painful memories. But when Dulcie's mom informs Dulcie that she's bought a new Volvo and is going to trade in the ancient truck that belonged to Dulcie's father, Dulcie is horrified and knows she's not ready to part with the last of her father's possessions. So, she steals the truck and drives back home to Connecticut, where she moves in with her grandfather and discovers, by way of a new friendship, that life could be much worse.

I ordered Defining Dulcie from Paperback Swap on the recommendation of one of my reading twins, Sharon. I think I liked the idea as much as the story itself, but it was executed well. The story nicely blends humor with the more serious issue of grief and is not just about Dulcie defining who she is, but about friendship and love, loss and life, affection for words and unexpected connections.

I loved the characters in Defining Dulcie. When Dulcie's new friend showed up, I thought she was less clearly defined (and maybe a bit too much like Dulcie, her father and her grandfather) than she should have been. There a few too many characters with the same quirky sense of humor. And, yet, I loved their unique brand of humor and found the story a refreshing, light read and very enjoyable..

Thumbs up, 4/5 - Dulcie, her father (who is described in flashback scenes) and her grandfather are all such lovable characters that you can't help but gobble up this book for the sheer joy of their dialogue. I'd definitely like to read more by this author. Defining Dulcie is a witty, warm , bittersweet tale of love, laughter and life. It's short -- almost too short -- but a great little snack of a book.

Just finished: Ella Enchanted by Gail Carson Levine. Now I have to locate the movie. I've checked it out from the library in the past, but I didn't get around to viewing. And, yet, the movie managed to invade my thoughts. I knew that Anne Hathaway played Ella, so the Ella I visualized had Anne's face. The prince will probably be shockingly different from my imagined prince. They usually are.

New neighbors: We have a couple of Mississippi kites (the bird, not the thing on a string) building a nest in a huge oak tree across the street from us. I hope to get some decent photos, soon. I've watched one of them -- probably the male, if my earlier sparrow homebuilding post is evidence of who does the building -- bringing home bits and pieces for their nest, but I was gardening at the time. My camera prefers not to be embedded with dirt and sweat, so I have just begun to attempt to capture them on film. While I was watching for kites, a hawk swooped fairly low, nearby. He was really beautiful. You'll just have to trust me on that, since I didn't manage to photograph him, either.

I just realized: I'm coming up on my 2-year blogiversary in about a month. Or, is it spelled bloggiversary? Either way, the spell-check robot objects. Point being, I had to go back through numerous posts in order to determine when I began blogging and discovered this little bit of bloggery posting about the book Shopportunity! by Kate Newlin and how it made me observing the contents of my home analytically:

Who'd have thought that a book about shopping--describing the reasons discount stores have yanked away the thrill of the hunt--could be a fascinating read? Newlin has me looking around my home, pondering the junk cramming practically every corner. Oh, my gosh. What a tacky cesspool of cheapness. What a ponderously mountainous mess of unnecessary trinkets. What a tragic homage to the cut-price and pointless. What a disaster of epic proportions!

Well, that really describes the packrat problem rather well, doesn't it?

Hubby is back from Norway (but leaving in the morning -- not happy about that). He did not bring me a Viking. He did, however, bring evidence that Vikings once lived in the area he visited: 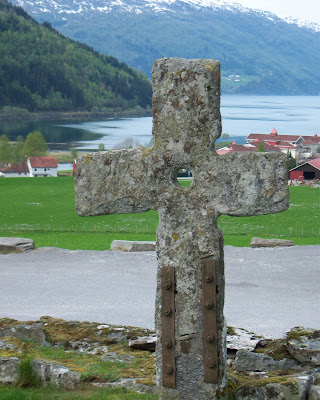 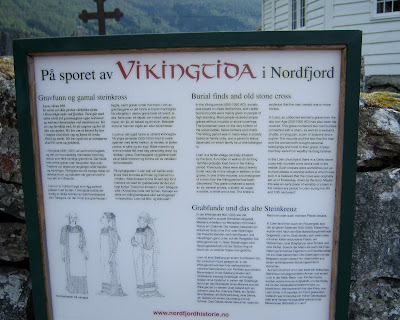 Well, cool. I guess that'll do. Huzzybuns did bring me a sweater -- which will, of course, be packed away for the next 6 months but we can't fault him because, "The Canadians talked me into it." Oh, those Canadians. So persuasive.

More photos of Norway forthcoming (because I figure y'all can join in on the painful envy I'm experiencing -- or at least enjoy the view). Of critical importance . . . must learn how to upload a video to YouTube and embed because you have got to see the video of the sheep. It is just the cutest darned thing I've seen in ages.