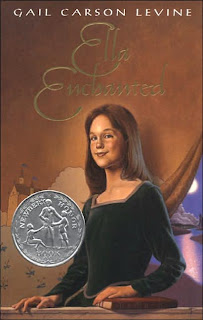 I'm going to borrow from Jenclair and do a 6-word review:

When Ella's lengthy wail inspires a fairy to give her the gift of obedience at birth, it becomes a painful curse. Rather than simply becoming obedient, Ella must obey any direct instruction given to her. Ella finds ways to delay her obedience, but she can't break the spell and nobody knows where to find the fairy who gave it to her in order for her to beg her to remove the gift that has become such a terrible curse.

Ella Enchanted is a retelling of Cinderella. Eventually, Ella becomes a lowly servant because of the fairy's gift and falls in love with a prince. I think it was a testament to the author's writing skill that it took me quite a while to realize that the book was based on Cinderella, but maybe that just means I'm slow. The book is, however, unique in many ways. Since it was the third Levine book I've read in the past month, I began to see certain patterns from previous books and it didn't spark my imagination or capture me the same way The Two Princesses of Bamarre and Fairest did. Bear in mind that it's very unusual for me to read several books by the same author within a year. I tend to like variety more than consistency, so it's not surprising that I liked the second book a little less than the first and the third a bit less than the second. And, yet, if I reflect on the three stories, I'd still have to say The Two Princesses of Bamarre was the most meaningful and adventurous of the three. Now, I wish I hadn't parted with my copy. Definitely an author worth reading, Ella Enchanted is a Newbery Honor book but not my personal favorite.

Just finished:
Vicksburg and Warren County: A History of People and Place by Pamela Lea Grillis

Another taste of Norway: 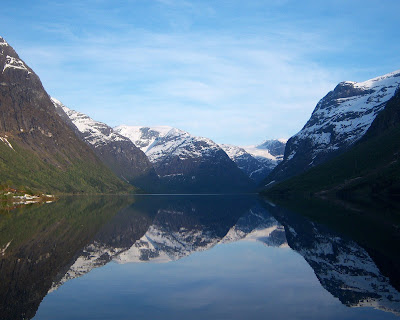 Wishing everyone a lovely, happy, wahooey weekend!
Posted by Bookfool at 7:24 PM