The Blood of Lambs by Kamal Saleem (review) 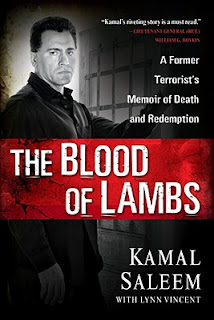 Since, we've been talking about memoirs, I realized I hadn't finished this particular book review and resurrected it. It's definitely become one of my favorite memoirs, simply because it was such a great learning experience and so well written.

I mentioned The Blood of Lambs in several past posts because it was so utterly gripping that the only times I put the book down willingly were those moments when the violence simply overwhelmed me. Be forewarned: Kamal Saleem was recruited by radical Islamists at the tender age of 7 and that same year he went on his first mission into Israel. From then on, you will read about many, many years of terrorist training in hatred and anger, violent missions, and the deaths of innocents. This is not an easy book to read, but it's a good one.

Since I've already chattered about this book quite a bit, I've had a bit of difficulty deciding what to talk about and how to do an adequate job of reviewing but I'll do my best.

The Blood of Lambs is, as the subtitle says, the memoir of a former terrorist for the PLO. Kamal Saleem grew up very poor in Lebanon and the situation became worse each year, as more siblings were added to their tiny home. He only attended school for a short time and then was forced to quit in order to help work to feed the family. At the age Kamal began to work, I would have been in second grade.

While walking to work, one day, Kamal was attacked by two separate groups of bullies and then a third bunch came after him and he ran into a mosque for protection. This was his introduction to zealots. The men in the mosque saved him and made certain that he was never again endangered. But, they also introduced him to radical Muslim beliefs and he began training in explosives, weapons, and combat.

That same year, he went on his first mission into Israel. It's hard to imagine a 7-year-old learning how to build explosives, put together gun parts and go on missions where he saw his friends blown up, but that is exactly what happened. At home, Saleem became a hero as he eventually began to bring home money and his missions were celebrated by family and neighbors. He continued training and traveling on deadly missions until he became weary of death and asked to go to the U.S. to recruit people to the PLO cause.

The book goes back and forth in time, progressing through the author's past history and describing his experiences as one of three former terrorists who now travel and speak about their experiences. Kamal's tale is such a fascinating story that helps the reader understand how someone could be sucked into the radical mentality of a hatred and belief system that basically says, "Kill everyone else and rule them."

Why did Saleem decide to tell his story? He is no longer a terrorist or a Muslim, but he knows first-hand how terrorists think and why they do the things they do. Now an American citizen, Kamal has embarked on a new mission: to help people understand what's happening right under their noses. With his experience, he can explain how terrorists recruit, who is most vulnerable, what they believe, why they hate with such intensity, how they're trained, etc.

The most vulnerable people are those I suppose you could call "the usual suspects", folks who are poor (he brought groceries to poor people and wormed their way into their homes, introducing them to his beliefs), prisoners, and young people.

After all of that violence and mayhem, I was kind of relieved when he reached the part of his story that describes how his job as a recruiter for terrorists ended and he eventually converted to Christianity. This happens way toward the end of the book. It's not a book about Christianity and there's no proselytizing. Saleem talks a little bit about the accident that stopped his work in the video that is part of the sneak peek into The Blood of Lambs. But, he doesn't really talk about Christianity all that much. The book is really about his life as a terrorist. His conversion came about after he was shown love and caring without any expectation for the first time in his life, when a couple of total strangers offered to care for him in their home.

I highly recommend this book, especially to those who enjoy memoirs and/or are simply interested in reading about how and why people become terrorists and how they think. It's very illuminating.

I'm still reading the same three books I mentioned yesterday. Or, maybe Tuesday. I think I'm in need of some energizing minerals or something. I can't keep my head straight, this week.

You've been bouncing on the edge of your seat, waiting for the first lizard shots of the season, right? Well, in any case, they're out and they're shedding their skin. Here's one who needs to scratch his nose to get some of that dead stuff off: 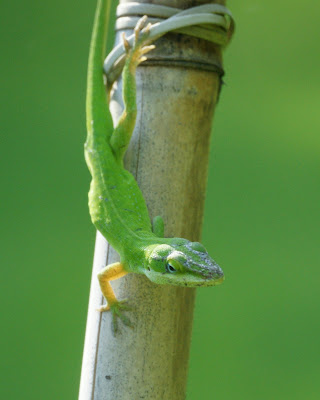 But, isn't he a cutie? I just love it when everything is so massively green. The skin on this fellow's back is one of my favorite colors -- a nice, apple green. Or, anole green. Summer is definitely coming.