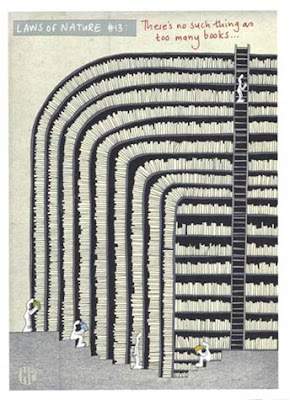 *In case I make mistakes or leave things out, updates will be in red. Also, I have no idea where I got that image ----> so if you created it and it's important to you to be acknowledged, just let me know.*

Holly's Inbox - by Holly Denham - 665 pages, followed closely by To Serve Them All My Days by R.F. Delderfield at 598 pages
Shortest book read in 2009 (not including children's books): Sometimes My Heart Pushes My Ribs by Ellen Kennedy - 64 pages
Fiction reads: 135
Non-fiction reads: 67 - In spite of the fact that I tried to go easy on the non-fic

Usually, I write new-vs.-previously-read authors, at this point. It looks like an exhausting job. I'm skipping it.

Commonality in a lot of my favorites:

I seemed to favor books that made me smile, taught me something new or took me on an exciting adventure. Fantastic writing was a bit rare, this year.
Best (and longest) title: During My Nervous Breakdown I Want to Have a Biographer Present by Brandon S. Gorrell

Love Begins in Winter by Simon Van Booy - After I loudly gushed about this book, some smartypants committee gave him an award for the book (the Franklin O'Conner Short Story Award), which just goes to show that you should listen to Bookfool when she says someone's writing is all kinds of awesome.
The Girl She Used to Be by David Cristofano - This one may surprise some people, but I thought the story was absolutely pitch-perfect.
The Foundling by Georgette Heyer - Awesome writing, adventurous plot, excellent characters, lots of laughs and some white-knuckle excitement. I think Heyer was amazing, but this is the most entertaining of her books that I've read, so far.
The Lone Ranger and Tonto Fistfight in Heaven by Sherman Alexie - His writing simply blows me away.
Also, kudos to Ruth Reichl. While I didn't care for Not Becoming My Mother, her writing is so breathtaking that I rushed off to add a bunch of her other books to my wish list.
Anne Fadiman's writing is awesome, too, even though she makes me feel like chopped-liver-for-brains. I'm saving Ex Libris to use as a study in vocabulary, someday.

A Circle of Souls by Preetham Grandhi (Hope to post a review of this one, soon).
Authors I read more than once:
Simon Van Booy (2) - I read Love Begins in Winter twice and bought 3 copies. Who hasn't read it, yet? We need to talk.
Gene Luen Yang (2)
Shaunti Feldhahn (2)
Colleen Gleason (2) - The second book was written under a pseudonym (Joss Ware).
Ellen Potter (2)
Dr. Carl Verner (2)
Paul McCusker (3)
Greg Garrett (2)
Georgette Heyer (4)
Scott Westerfeld (3 - Uglies, Pretties, Specials)
Jeff Smith (5 - all from the Bone graphic novel series)
Margaret Peterson Haddix (3 from 2 diff. series)
Debbie Macomber (2)
Authors I wish would hurry up and write more:
Patricia Wood - I hear she has turned in her next book -- Wahoo!!!! Now, get back to work, Pat. Kidding, kidding.
Simon Van Booy - Always waiting for more. Always, always. And, that's in spite of the fact that he's Hot Stuff so there's plenty coming. Thank you, Harper Perennial, for signing Simon.
Hugh Laurie - Still waiting, Hugh - come on, hurry up. That House, M.D. gig is no excuse.
John Green - I didn't like Paper Towns as much as his first two, but we're talking itsy bitsy degrees. I love John Green's writing, his attitude, his respect for teens, his nerdiness . . . and his hair.
So far in 2010: I've read a whopping three books. This is partly because I'm reading 2 chunksters at once and partly because it's a hell of a job keeping up with a blind cat who wants to sleep in the room with the new carpet and can't find her way to the food bowls or litterbox from there.

Favorite moment in the past week:

When we heard the rain. No ice storm!! Squeee! We are all happy to have dodged that bullet.
Reading goals for 2010 - not using the word "resolutions", this year:
1. Read from my shelves.
2. Purchase no more than 1 book per month (so far, so good)
3. Read what I love; love what I read. Stop reading if a book doesn't grab me. Seriously! I mean it!!!
4. Quit worrying about the fact that I'm just about the only blogger on the planet who doesn't participate in challenges and that I can never, ever keep up with that damned Google Reader.
5. Read at least 144 books.
6. Read no more than 1 or 2 advanced readers per month. It'll be really fun to see how this one works out. I've got a couple of seriously tempting offers in my in-box.
7. Seek out and read more classics, better writing, and a broader variety of international writers.
8. Get all caught up on the pile of ARCs I didn't get to in 2009.
I think this post is more than long enough. I shall cease and desist, now. Happy weekend to everyone!
Posted by Bookfool at 11:20 AM

Email ThisBlogThis!Share to TwitterShare to FacebookShare to Pinterest
Labels: One Year's Favorite Reads