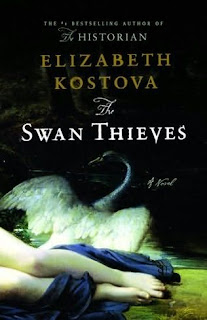 The Swan Thieves by Elizabeth Kostova
Copyright 2010
Little Brown - Fiction
565 pages
I finished reading The Swan Thieves a couple of days ago and I've had to let it roll around in my head a bit. I'm not even certain I can fully express how I feel about it, but I'll give reviewing the old college try.

First of all, you should know that this is my first Elizabeth Kostova read. I haven't read The Historian and I resisted reading it for a very long time, simply because: a) it's a chunkster and b) it didn't sound like my kind of book. I've been scolded about that, a good bit, but we'll worry about whether Bookfool will get around to reading The Historian some other time.

tells the story of a psychiatrist who goes over and above the call of duty in seeking out answers to a troublesome patient's depression and anger. When Robert Oliver is brought to Goldengrove (a live-in psychiatric facility) after attempting to attack a painting with a knife, he speaks to Dr. Marlow briefly and pretty much says, "Feel free to ask anyone you want to about my problems." Then, he ceases to speak. Oliver is a painter (Artist #1) and Dr. Marlow finds his attack on a painting baffling. Marlow is also an artist (Artist #2). He brings Oliver paints, brushes and an easel in the hopes that resuming his painting will help Oliver open up, but he gets absolutely nowhere. A set of letters written in the late 19th Century, which Oliver reads repeatedly, add some additional clues while simultaneously managing to muddy the waters.

Eventually, Marlow decides to take Oliver up on his offer to interview whomever he pleases and Marlow contacts Oliver's ex-wife, Kate. Kate (Artist #3) says she really doesn't want to talk about her ex, but then she does an about-face and tells him their story in gory detail, all the way from the time they met (which, I agree with Katherine, is totally forced and screamed "plot device") to their divorce. In Kate's house, Marlow finds some clues to Oliver's obsessive, repetitive painting of a particular woman, but he still has no real answers and eventually moves on to interviewing yet another painter (Artist #4 -- really, a little variety in the characters would have been just dandy) and the next woman in Oliver's life, Mary.

Here we toss in something else that I found rather uncomfortably implausible, but I don't want to give that away so let me just say . . . Mary sounds just like Kate, who sounds just like Marlow in that everything she says -- and Mary decides to type up her story, rather than telling it in person as Kate did, which doesn't change things a bit -- is told in excruciating detail, through the eyes of an artist, and without bothering to leave out some cringe-worthy personal details that serve no purpose, whatsoever.

This is not a well-crafted novel. I like Elizabeth Kostova's writing in that it's evocative of the senses. At times, I enjoyed the detail; I was in the mood for a chunky book full of heavy description (very unusual for me). Normally, I wouldn't have gotten far but I wanted to know the answer to who the mysterious woman in the paintings was and why Robert Oliver was so obsessed.

But, the lack of distinction between the characters, obvious plot devices and a few "clues" that end up being fairly meaningless made the book a mediocre read. At the end of The Swan Thieves I realized the mystery wasn't all that mysterious -- I'd done a pretty good job of figuring everything out by about page 200. There were also a few bizarre little let-downs. There is, for example, a character named "Olivier" in the book. I anticipated a connection between Oliver and Olivier. Could they have been related and Robert's last name Americanized? What if Oliver was the reincarnation of Olivier, thus giving Robert a reason that a long-ago romance haunted the young artist?

Well, no. Nothing that exciting happened. In fact, Olivier turned out to be a given name rather than a surname. It would have been better, I think, had there been a connection between Robert Oliver and at least one of the characters from the past. And, the ending . . . oh, my gosh. The ending really kind of ticked me off. I've decided I won't put up a spoiler alert and mention the ending but I think I can safely say that it was just flat ridiculous and confirmed my lingering suspicion that one of those transparent plot devices was the refusal of Robert Oliver to speak. There wasn't any valid reason for him not to speak. He could have just told the psychiatrist everything that it took 565 pages for Marlow to unearth.

So, I guess I felt a little used. But, I still enjoyed the book. Go figure. The only thing that really bugged me, all the way through the book, was that every key character was an artist and every key character sounded exactly the same. And, then, of course the ending . . . in the end, the psychiatrist didn't actually do the job of a psychiatrist but he still managed to perform a miracle by talking to everyone but the patient and figuring out what was eating him.

. The detailed descriptions are lovely if you're in the mood to have someone throw an encyclopedia of art and nature at your head, but this author needs to work on giving her characters more distinctive voices and make sure that each scene has a purpose. There was way too much superfluous information -- clues that didn't actually mean much of anything at all and heavy detail that quite simply ought to have been cut.

Bear in mind that I still enjoyed the book. It's just very flawed, in my personal humble opinion.

This is the first of about a squillion reviews

I need to write. I think I may do a few slap-dash, quickie reviews in the coming days, just so that I can avoid skipping any of my recent reads entirely but spend a little less time agonizing over reviews than I did on this one. This review took forever to write. Ask Kiddo. He keeps walking into the room to say, "Are you still working on your review?" Yes, and nobody's paying me. Maybe I should give up blogging and become a productive citizen.