The Cat Inside by William S. Burroughs 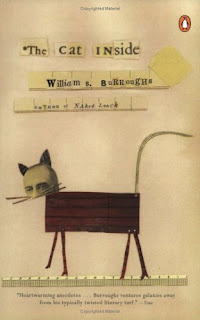 My relationship with cats has saved me from a deadly, pervasive ignorance.

Purring in his sleep, Fletch stretches out his little black paws to touch my hands, the claws withdrawn, just a gentle touch to assure him that I am there beside him as he sleeps. He must have a dream image of me. Cats are said to be colorblind: grainy black-and-white, a flickering silver film full of rents as I leave the room, come back, go out, pick him up, put him down. Who could harm such a creature? Train his dog to kill him! Cat hate reflects an ugly, stupid, loutish, bigoted spirit. There can be no compromise with this ugly spirit.

The time to pet a cat is when the cat is eating. That is not the time to pet a dog. It is good to pet a sleeping cat. He stretches and purrs in sleep. Better let sleeping dogs lie. I remember at the poetry festival in Rome, John Giorno and I are going down to breakfast. A big dog is sleeping on a landing.

"This is a very friendly dog," John said, and bent down to pet the beast, who growled ominously and showed his yellow teeth.

This cat book is an allegory, in which the writer's past life is presented to him in a cat charade. Not that the cats are puppets. Far from it. They are living, breathing creatures, and when any other being is contacted, it is sad: because you see the limitations, the pain and fear and the final death. That is what contact means. That is what I see when I touch a cat and find that tears are flowing down my face.

I'm being a little lazy using quotes from The Cat Inside, but you can see from that last quote that the author's intent was to write a book that wasn't just about cats but which was an allegory. In fact, I think it's only part allegory and part memoir. Some of the stories he tells (all are brief) are allegorical and those are, quite frankly, the weird ones. Cats as glowing creatures with bat-like ears, slicked back, haunting or haunted, silent and stealthy or gypsy-like. Those particular writings, which play more heavily at the beginning of the book, did not thrill me. I'd rather read true cat stories or cats as side characters in a novel than anything so bizarre as a story in which a cat represents something else entirely.

But, eventually, the author begins to focus on his cats, the companions who have come and gone from his life, but mostly those that lived with or near him while he was living in Kansas, first in a stone house and then in a second home that he liked better but which seems to have lacked a bit of the first house's elderly charm. And, this is where I believe the book shines. He has a lovely way of describing what's beautiful about a cat, why they're superior to dogs (in his opinion), their uniquely feline habits and the idiosyncracies that define the cats he's known personally.

In general, this book is a very strange little book. But, I enjoyed the autobiographical bits. I'm not sure, but I think I might have a copy of one of Burroughs' better-known books, Naked Lunch. If so, I think I'll need drugs to get through it. Just kidding. He certainly did have a rather hallucinogenic writing style when he drifted into allegory.

I'm iffy on recommending this book. Burroughs seems to have been a writer's writer. If you like allegory, enjoy digging for meaning, like a Picasso-like artistry in words, or just love cats and want to read the parts that are autobiographical, the book is probably worth checking out. I liked it. I didn't love The Cat Inside, but I liked enough of it that I don't regret reading the book. I have no idea how to rate it, but I'd say it would probably be better to check the book out from the library than purchase it. I bought my copy. I think I'd rather frame it (I really like that cat with the human head -- which is accurate to some of the text) than read it, again.
Posted by Bookfool at 7:38 AM