The Making of the African Queen by Katharine Hepburn 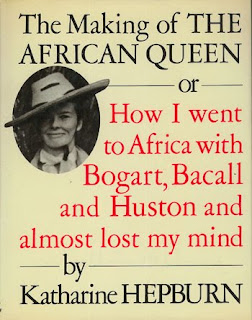 The Making of THE AFRICAN QUEEN or How I Went to Africa with Bogart, Bacall and Huston and almost lost my mind
By Katharine Hepburn
Copyright 1987
Plume - Nonfiction/Memoir
129 pages

I've read the book, by C. S. Forester, and I love the movie. So, when I happened across a tattered copy of The Making of THE AFRICAN QUEEN by Katharine Hepburn in my local library sale, I snatched it up.

I have Katharine Hepburn's autobiography, Me, and have read bits and pieces of it. Her writing style was oddly fragmented, very stream-of-consciousness if the stream is coming from someone who frequently interrupts her own thoughts. So, it's a little bit of a pain to read, at times, but the book is still quite interesting. Near as I can tell, it was John Huston who went the farthest towards causing Hepburn to "almost lose" her mind. He evaded her questions about the script, costumes, filming, location . . . you name it. The man seems to have been so wrapped up in his own little world that he didn't have time for his stars.

Humphrey Bogart reassured Katharine Hepburn that John Huston was always that way; she might as well just get used to it. And, she seems to have easily gotten into the swing of things, once Hepburn was settled into her little hut on a hill in the jungle. She wasn't happy that the Bogarts' hut was decorated in her favorite colors, but her hut location was perfect and that's what counted. Yes, she was quite picky that way -- a bit on the arrogant side, certainly, but dedicated to her craft.

The Making of THE AFRICAN QUEEN was a fun, quick read and the book is packed with photographs that give you a good visual of the anecdotes she shares. There's a photo of her lounging on the porch of her jungle hut and another of her washing her hair in a bucket. You get to see how they had to cross the river on rafts in order to reach the set and how she had to change clothing pretty much in view of the entire crew. The book was a fun diversion on a day when nothing else was grabbing my interest.
Posted by Bookfool at 11:45 AM