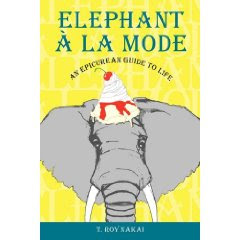 Roy Nakai was born at the Manzanar War Relocation Center during WWII, an American concentration camp. When I read the promo for Elephant à la Mode, which was sent to me by the author, I thought there would be more information in the book about what his family experienced living as American citizens in what amounted to a prison colony. There was actually very little about the camp itself. Of course, Nakai was young enough not to have any memory of his birthplace. But, the theme of the book starts with the camp and continues through the memoir and, indeed, his entire life.

While imprisoned, Roy's parents and those who were with them put their focus on a phrase and a word. "Shikata na gai" means "It cannot be helped." They reminded each other of this fact in the camp, and later Roy's family raised him with that phrase as a reminder that things happen and you just have to live with them or "gaman", which means "to persevere".

I picked up this book thinking I'd take my time with it, the way I usually do because I balance so many books. Instead, I had a bit of trouble putting it down. This particular memoir is about the author's personal challenges and how he's survived them. It's written in a really annoying format, as conversations between Roy and his daughter or Roy and his therapist, but I felt like it was worth working a little to read the book.

You know something awfully traumatic must have occurred for him to end up with the therapist, but he takes his time describing his life. In spite of the fact that the book is awkwardly written, his life story is really quite fascinating and his family history puts a unique spin on what can be a slightly tired genre. He seems like a likable guy, the kind who remains a friend for life but has a tendency to ignore the spouse (he's been married three times), devoted to his child and fond enough of children that he chose to become a pediatric dentist because he liked working with youngsters.

Roy Nakai had been working as a pediatric dentist for 25 years when tragedy ended his career as a dentist and he was forced to reinvent himself in order to survive. And, then an even worse tragedy struck. I'm not sure it's a spoiler, although it's left out of the publicity material, so I'll treat this bit as a spoiler.

Oh, no, not the red letters, again. POSSIBLE SPOILER ALERT!!!! Read at your own risk! You have been warned.

The second tragedy was the death of his only daughter. I think it would have actually been helpful to know about his daughter's death, simply because the "conversation" format is so clunky. You have to really want to read his story to continue, if you happen to find his choice of presentation uncomfortable or just flat annoying. I really wanted to read his story, so I chose to gaman through the rough writing. And, when I got to the death of his daughter, I must admit I sucked in my breath and cried a little. It was a shock. I think he wanted you to be a little stunned because the point is that, all along, part of his method of getting through tragedy has been to keep a conversation going with his daughter about how important it is to keep on living.

This book was seriously in need of some editing. There are misused and misspelled words and it's not a smooth read because of the conversational format. In general, I tend to avoid reviewing books by Outskirts Press (a self-pub) because of the lack of editing and frequently-poor writing. But, I couldn't bear to pass this one up. And the roughness didn't stop the book from being a really good story with a wonderful theme -- bad things happen and it's your job to keep going, transform yourself if necessary, and move on.

4/5 - I feel obligated to take a point off for the awkward writing and poor editing, but I loved this book. It was just what I needed. The author's tragedies helped me put the loss of my fur buddy into perspective and gave me a mental boost; it helped me get up off the couch. In the end, I understood the reason he chose to write the book as a conversation with his daughter (less so, the bits in which he conversed with his therapist --although she was a part of his healing process) and felt that it was still a bad choice, but the book is so meaningful and poignant that I recommend it.

Just don't come running to me to complain about the format. It's really annoying, but if you're struggling with loss or wondering whether it's worth going on, Roy's story might help you. It helped me. Thank you, Roy. And, my thanks for the review copy.
Posted by Bookfool at 8:02 AM