Kitty Stuff . . . Cause Nothing Else is Working

I've been wrestling with the same review for two three days and my options at this point seem to be:

1. Print it out and shoot it (with nerf darts, obviously), or
2. Try writing something else and then go back to that uncooperative review, later.
I've decided to go with the latter because I'm not sure where the nerf guns have gone. So . . . 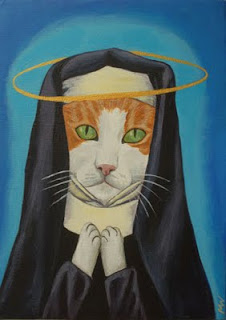 Jason of Moored at Sea has come up with a lovely fund-raising project, the Poor Kitties Memorial Fund. Apparently, Neil Gaiman and I have something in common beyond our love of books. Read that 50 times as this is likely the only time you'll see "Neil Gaiman and I have something in common." And what, you ask, might we have in common? He has a dying, blind kitty. Well, okay, mine has already perished but there have been some grieving cat lovers in Jason's sphere and this spurned him to action. Gaiman's cat is named Zoe.
Update: Neil Gaiman has posted a blog entry about the death of Zoe. She died last night, Sunday, January 24. My condolences to Mr. Gaiman.

What a crap thing to have in common with a fabulous author -- dying/dead blind kitties. But let's just try not to think about that and focus on the good.

Jason decided to hold a charity drive "in memoriam of poor kitties" and Mr. Gaiman suggested The Great Lakes Bengal Rescue as the recipient of said charity for kitties. Alternately, one can donate locally, of course. The idea is to do a kindness for kitties. This is a fundraiser I can get behind. Both our dearly departed kitties, Spooky and Sunshine, were rescues.
Spooky and Sunshine taught me a great deal about life and love. I truly believe our pets give back as much love as they're given and then some. At this point, I still get teary when I look at kittens online, so I think I need to give myself a little time to grieve before we adopt again, but a house without any fur kids just sucks. It's way too quiet. No crunching cereal noises, no meow of hunger, no purring. I'm going to donate. I hope you will, too.
Posted by Bookfool at 5:55 PM

Email ThisBlogThis!Share to TwitterShare to FacebookShare to Pinterest
Labels: Cats