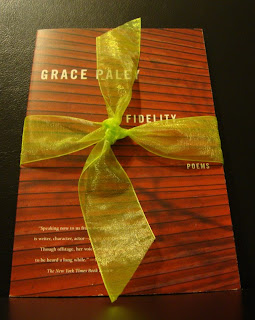 I got Fidelity as a Christmas gift from my future daughter-in-law (hence, the ribbon, which I put back on the book after discarding the wrapping paper). Future DIL says it's one of her favorite books and she's given many copies away.

It took me approximately 8-10 poems' worth to become accustomed to Paley's writing style, but then I began to really understand why my future DIL loves her. Paley's reflective at times and sounds a little tired, a bit resigned.

The book was published posthumously, the poems written not long before her death. There's a bit of sharp reality in many of her words; she didn't have long and she knew it. But, at the same time, she managed to inject plenty of humor, wisdom, thoughts about family and friends and how we're tied together, reminiscences about art and creation. She talks about her home territory, which is so far removed from the places I've lived that it seemed a little foreign to me, but I would imagine my future daughter-in-law finds those references homey because she's also from the East Coast.

There's a quote on the back of the book that I think describes the book well:

These poems mark [Paley's] passage (heels dug in, sure she should be more gracious about the whole thing) closer to death. 'I had put my days behind me . . . ,' she writes: 'future was my intention.' So she tries (still learning, still trying to get it right in her eighties) to savor the days. Fidelity is a record of that savoring." --Susan Salter Reynolds, Los Angeles Times Book Review

That's such a lovely description. I think there's an elegance to Paley's writing, and yet she's not one to pretty the truth if she has something negative to say about being lonely or old. Fidelity is a thought-provoking wonder and just one more reason I can't wait till my son marries. It will be such fun adding an avid reader to the family.

My thanks to Sarah for a lovely gift that will go on the good shelves.
Posted by Bookfool at 9:45 AM