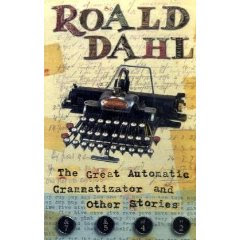 The Great Automatic Grammatizator is a collection of Roald Dahl's adult stories specifically gathered to market to young adults. To be honest, I doubt I realized it was marketed to the YA crowd when I bought it because it was one of those books I snatched up at such a bargain price that the manner in which it was classified surely didn't matter. But, I thought the Young Adult classification was rather interesting given the fact that some of the stories seemed awfully adult -- not in a rude way but in the manner of events or situations.

"Mrs. Bixby and the Colonel's Coat", for example, is a horror story involving a married woman, a lover, and a mink coat. The story tells what happens when Mrs. Bixby, who has had a lengthy affair with a wealthy colonel, gets a beautiful mink coat as a parting gift when he decides to end the affair. You get into Mrs. Bixby's head a bit, which is part of the adultness and creepy factor. She considers her husband a dull man, not exciting or particularly handsome, and certainly less demanding in the bedroom as the years of her marriage and affair have gone by.

There's no way she can justify the acquisition of a fancy mink coat, so she decides to pawn the coat without giving the shop her personal information. She then informs her husband that she's found a pawn ticket with no name on it. He agrees to collect the pawned item for the $50 disbursement listed on the ticket because it must be something of great value -- whatever some unknown person pawned, he assumes it's worth paying $50 for. There's a clever, awful twist that I probably shouldn't mention but . . . here, I'll save you with a spoiler alert, so you can decide whether or not to read on:

SPOILER ALERT - Don't read this spoiler if you plan to read the short story, "Mrs. Bixby and the Colonel's Coat" right away (or you just don't want to know the ending because that would be cheating)!!!! You have been warned!

It turns out Mrs. Bixby's husband, a dentist of moderate means (who certainly couldn't afford such a deliriously high-quality mink coat) has been having an affair of his own. His wife eagerly shows up at his dental practice expecting to find that he's retrieved the coat. Instead, he hands her a hideous mink collar with two little mink heads grasping each other's jaws. And, then the dentist's secretary walks by in a glossy mink coat.

The situation in that story seems pretty adult to me but, then again, I suppose affairs are just run-of-the-mill to the younger crowd, these days, given what's on TV.

The way Roald Dahl takes ordinary situations and turns them into horror reminds me a bit of Richard Matheson's short stories, such as "The Incredible Shrinking Man". Like Matheson, Dahl's stories begin with a completely ordinary person or situation. Something minor but ominous or telling occurs and then the author keeps ramping up the suspense until the story ends on a truly awful note or with a surprising twist. His stories are creepy, but at the same time Dahl maintains his sense of humor. I do love Dahl's sense of humor. My favorite of his works by far was Going Solo, one of two memoirs he wrote -- at least in part because his real-life anecdotes tend to be really funny. The creepy factor is missing entirely from Going Solo.

I enjoyed The Great Automatic Grammatizator and Other Stories, but there was only one story that I considered knock-your-socks-off amazing writing and that was "Katina", the story of a young Greek girl who is adopted by RAF fighters "in the last days of the Greek campaign" of WWII, after her family is killed in the bombing. "Katina" is an incredibly vivid, moving story, unquestionably realistic because Dahl served in the RAF and experienced WWII first-hand. The brutal honesty of the story and its tragic ending combine to make "Katina" both believable and poignant. I think "Katina" is worth the price of the book. It's truly a beautiful piece of writing.

Rating an anthology or collection is so rough. I'd give "Katina" a 5/5, but I think the endings of most of the stories are a little abrupt, if apropos, and people who don't like short stories would tend to dislike this collection. I'm a little more tolerant with short stories than a lot of people and I like Dahl's writing enough that I'd rate it a 3.75/5, overall. The writing is solid, but I didn't enjoy it as much as some collections.

I had to look up anthology vs. collection to figure out if I was using the word "collection" correctly and I happened across the concept of the "omnibus", a word that is totally new to me in the literary sense. Here's the definition I found for the word "omnibus": A volume of reprinted works of a single author or of works related in interest or theme.

Since I don't think the works in The Great Automatic Grammatizator are all thematically related (certainly, there is only one WWII story) and they came from various books by the same author, I'm going with "collection" as the descriptor. Never say I don't keep you informed.

I found a wonderful article written by one of Dahl's daughters in 2005, reminiscing about her father upon the release of a new movie version of Charlie and the Chocolate Factory. I was reading a little bit about Dahl and searching for photos when I happened across that article -- probably for a really ridiculous reason: I wanted to see a photo of him standing because I knew he was tall, but I didn't realize he was that tall -- Dahl was 6'6". I never did find a standing photo, partly because I got sidetracked.

While I was bopping around the internet, I also happened across an article about measles written by Roald Dahl. The story was connected to a modern story about a woman in Great Britain who chose not to have her daughter given the "jab" to protect her from measles and whose daughter then ended up in a hospital with a bad case of measles, gasping for breath and unable to have visitors. The article was linked up to Dahl's own story about the death of one of his daughters before measles innoculations became available. Dahl's 7-year-old daughter, Olivia, was recovering from a long battle with the illness, he said, when he handed her some pipe cleaners to play with. Her mind, however, was not connecting with her hands and he became concerned. Within an hour, he said, she was comatose. Within 12 hours, she was dead. The doctors could do nothing to stop the measles-induced version of encephalitis that killed her.

My childhood innoculation against measles "didn't take" and I was very, very sick for several weeks but I had no idea the disease could be deadly, so I found that essay fascinating. Dahl's objective was to encourage British parents to get their children innoculated because the vaccination was not mandatory in Great Britain. The United States had made it mandatory some years prior to the time he wrote the article.

Anyway . . . babble, babble. Look up Roald Dahl and you'll learn all sorts of fascinating things. I'm convinced I would have loved to meet him and, of course, we would have ended up friends for life and la-di-da.

I've spent way too much time goofing around, going on tangential Roald Dahl-related journeys, today, so I'll stop here. I'm not writing my reviews in any sort of order. Maybe next time I'll shoot for brevity and succeed. I don't even know what I'll be writing about. Someone shake me.

Off to do the housework I ignored all day. Happy Thursday!

Bookfool who really should get up off the chair, for crying out loud
Posted by Bookfool at 12:14 PM