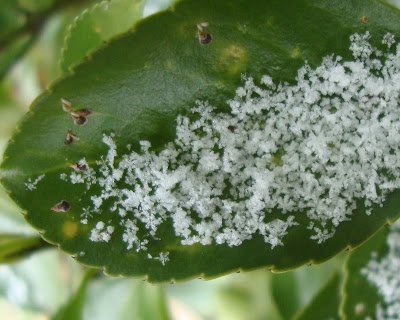 We had a second snowfall, this week! It didn't last long and it promptly melted, but as you can see from the photo above (taken with my handy, dandy new point-and-shoot), the separate snowflakes were beautifully formed. I took photos of snowflakes on my fleece shirt, in my son's hair, on the car, in the leaves. Lovely, lovely. 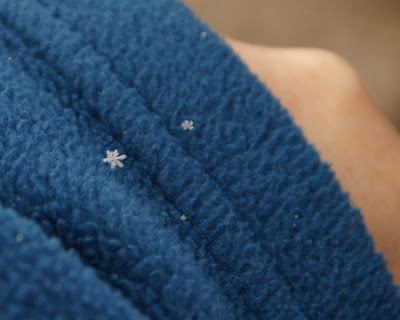 At this moment, we're bracing for the winter storm that most of the country is expecting but we're not supposed to get snow. This time around, it's too warm and we're right on the borderline between the expected snow area and rain, which means . . . ice storm. I hate ice storms. We don't own a generator, in spite of the fact that I've been lobbying to get one for about 15 years, and now our fireplace is cracked so we can't use it. We always, always lose power in an ice storm and once we hit the level of ice that breaks tree limbs, it becomes really noisy and frightening as limbs and trees crash down around us.

I've spent the day washing laundry and cleaning dishes to avoid having to worry about smelly piles of things that can't be washed and the husband has been cooking a few things that can be nibbled without the necessity to heat or cool them. We have at least three working flashlights and plenty of candles all ready. I'm hoping all this preparation will scare the ice away.

If the power goes out, I plan to huddle with the cat and read like crazy by flashlight. I'm currently reading three books:

I was enjoying all of them till I had to take today off to actually do some housework. The cat, fortunately, had an alternative lap (the kiddo's) so she's been happy in spite of my activity level. Tonight, Kiddo said he'd had enough of lying about with a cat on his lap and now the husband has her. We're nothing if not a family that coddles its feline.

I'm hoping to participate in the Bloggiesta hosted by MawBooks in order to do a little catch-up, this weekend, power permitting. Since we're expecting the ice to show up in the middle of the night, I think I'll just go ahead and shut down till after the storm that I hope won't materialize. Wishes for warmth and safety to all during the winter storm!

Bookfool, off to clean myself since the house is pretty much done
Posted by Bookfool at 8:01 PM