How I Spent My Christmas Vacation 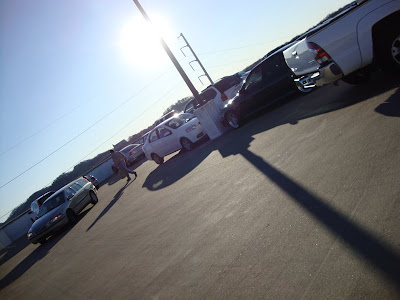 Hello, everybody!!! I missed you! I'm glad I took off, though, because we were really, really busy during our holiday break. We drove up to Nashville for Christmas, then down to Birmingham and on to Huntsville, Alabama.

Because we spent our Christmas in Nashville (where future Daughter-in-Law lives) and it turns out Davis Kidd Booksellers is a very, very dangerous place (plus, I dropped by Barnes & Noble - one is a B & N book; feel free to guess which one), I came home with a pretty little pile. At the top of this post is a totally accidental shot of my husband carrying the bag of books across the parking garage, which I took when I turned the camera on while walking and then tried to turn it off but hit the wrong button. Isn't that cool? Anyway, books. You're here for the books: 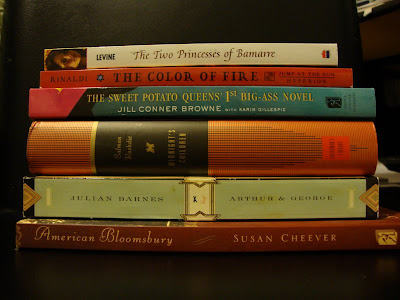 Top to bottom:
The Two Princesses of Bamarre - Gail Carson Levine (I've read this one and regretted parting with my copy, but this copy is prettier)
The Color of Fire - Ann Rinaldi
The Sweet Potato Queens' 1st Big-Ass Novel - Jill Conner Browne
Midnight's Children - Salman Rushdie
Arthur & George - Julian Barnes
American Bloomsbury - Susan Cheever
4 out of 6 were on my wish list, including that replacement book. I took that nifty wide-angle photo with my Christmas gift from Huzzybuns: 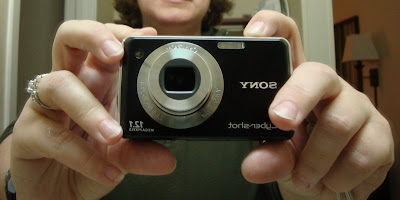 I'm just thanking the Lord that my fingernails were clean. Haha. Anyway . . . you know I have a pretty nice SLR, right? Well, when we were in Costa Rica, I had to keep that sucker bagged during car rides and I felt like I was missing out on some exciting photo opportunities. I did take a few photos from inside taxis and they were really interesting, but we were jostled around so much (one time, I was stuck in a loose jump seat without a working safety belt and felt obligated to hang on for dear life) that I feared for the health of my camera along with my own fragile bones and tucked it away most of the time.

Since then, I've been begging the huz for a nice little portable camera but I wanted one with a Zeiss lens because the nicer the lens, the better the photos. The number of pixels can be totally misleading. He got me just what I wanted and all of our Christmas pics were taken with my new little toy. Such fun!

This is one of my favorite photos - a shot of eldest son reflected in a Nashville puddle: 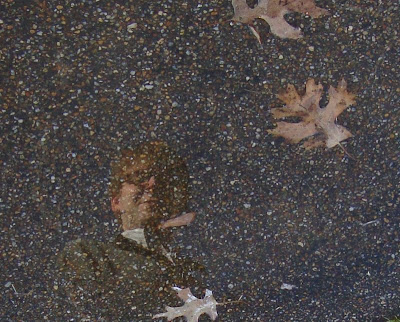 We chose to go to Tennessee instead of Oklahoma because when we asked Kiddo what he wanted to do over Christmas break, he surprised us with a very firm plan. "I'm going to Space Camp." Well, okay, we said. We signed him up and decided that we couldn't go two directions (Oklahoma is our home state) and then it turned out that Oklahoma was CLOSED on Christmas Eve, anyway, so we all said, "Yeah. Good decision." We did a lot of driving, though. First was the trip up to Nashville. Then, we dropped the kiddo off at Space Camp in Huntsville: 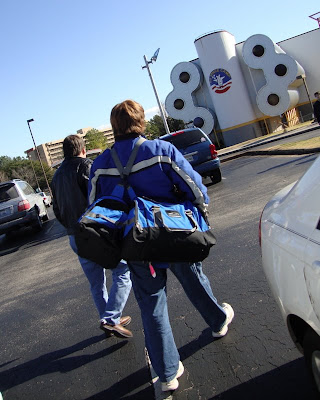 After dropping off the kiddo, we headed to Birmingham for the night and then drove on home to Mississippi. Blind Kitty had spent 5 days boarded at the vet, by that point, and was a total, whiny mess. So, we took turns cuddling her for two days and then had to board her, again, so we could dash back to Huntsville to pick up our youngest. Like most of our trips, we spent a lot of time shopping for food because the closest Whole Foods is a 3 1/2-hour drive and the closest Trader Joe's is in Nashville. I think we went to at least 3 Whole Foods stores. We made lots of bookstore stops, too, of course!

Husband returns to work, tomorrow, and son goes back to school Thursday. I think I can safely say I'll be glad to have a little alone time by Thursday, but we had a great vacation -- especially the kiddo. Space Camp sounds like all kinds of awesome wrapped up in a rocket and lit with a match. I hope to get back to blog-hopping by the end of the week, catch up on a few reviews, write a December Reads in Review post and talk about plans for 2010, soon. I've actually read a bunch of your posts but I had a cat on my lap and a little netbook thing balanced alternately on my chest or the arm of a chair (and without a mouse), which made it pretty much impossible to comment. I'm really enjoying the end-of-year wrap-ups, though, and hope to chat with my book friends soon!

A newer, fresher Bookfool for a brand new year. At least, that's the objective.