Beyond the Night by Joss Ware 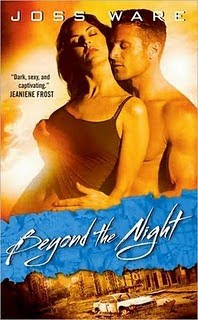 The cover blurb describes Beyond the Night as paranormal, but I would call it a futuristic/dystopian novel with some paranormal elements. I'm not sure if that's technically a correct description, but Beyond the Night is definitely set in the opposite of a utopian world.

Elliott Drake and several of his friends have awakened from a 50-year nap. They haven't aged; they just mysteriously bypassed 50 years. Elliott and his friends were exploring in a cave when disaster struck. After awakening, they emerged from the cave to find their world had been utterly destroyed. Now, they must survive in a world controlled by dangerous people who have discovered the secret to immortality and who use zombie-like creatures to do their dirty work.

Jade was captured by the immortals but managed to escape. Since her escape, she has changed her identity to protect herself and those she works with. Jade risks her life regularly as she and her cohorts seek to understand their insane new world and find a way to overcome their enemies. When she meets Dr. Drake, she initially distrusts him, but there's something that draws her to him and slowly he gains her confidence.

Elliott has developed a mysterious ability to cure illness or injury, but there's a catch. Not quite the miracle he originally thought it was, Elliott has to take care not to end up inadvertantly hurting people, as well.

Stuck in this new world together, Jade leads Elliott and friends to the town of Envy. Envy has such an interesting background that I don't think I'll share it; it was awfully fun reading the explanation for the name and the city's history. Once they get to Envy, things really start to happen. They've already had to defend themselves from the zombies or gangas. Now, in Envy, they happen across a secretive plot that could destroy what little the people sheltering in Envy have left. As they set out to find answers, they'll face new dangers and discover the secret that led to the world's destruction.

The secret is weird. I'm not sure how else to describe it and I don't want to give anything away. I enjoyed Beyond the Night because of the story's complexities and uniqueness. Joss Ware is a pen name for Colleen Gleason. In Beyond the Night, I recognized Colleen's hallmark - her ability to create a unique world in spite of the fact that she's entered highly-marketable (often "ditto") writing territory. That's what I loved about the book most, the uniqueness of her world.

What I didn't like was the bad language. There is much more truly nasty language than I expected; the author used a few words that I consider completely taboo, parental-advisory terms. I don't like reading them and I wouldn't hand a book that I know contains those words to my kid. The book is also definitely heavier on romance than what I became accustomed to in Colleen's Victoria Gardella vampire series, which might explain the pen name -- to distinguish the two distinctly different styles, one heavier on romance and the other heavier on action.

It's really totally unfair to compare the two series, but it's also difficult not to. I absolutely loved Colleen Gleason's vampire series and found I had to really work to shut off my expectations. In general, I liked Beyond the Night more the further I got into it. A lot happens, although I thought it was a little slow to crank up and there were times I thought the usual miraculous escape from danger was a little bit of a stretch, but I do like action scenes.

I'm not a typical romance reader in that I dislike graphic sex and bad language, so I'm not going to rate Beyond the Night. Instead, I'll say I enjoyed the fact that there was plenty of complexity to Joss Ware's futuristic world; but, since it's heavier on romance, I'd particularly recommend this book to the romance crowd. If you don't mind more emphasis on romance or are willing to overlook that and the bad language, go for it. Having said that, I do want to continue the series.

In other news: I am now so far behind myself that I'm not sure I'll ever catch up with me. Didn't I say I was going to write some mini reviews? I wonder what ever happened to those. Maybe they'll still appear. I make no promises. A few of the books I've read were sent by either a publisher or publicist and they have top priority. If I do write mini-reviews, it'll probably be a good thing, anyway. I've always thought my posts are way too long.

My eldest son helped divert my mind from the cat to other matters, this weekend. Note to son: I'll mail the Dave Ramsey book, tomorrow, and will be happy to generously offer you some excellent hints about how to stretch your grocery money. You can go a long way on a loaf of bread, a jar of peanut-butter, some raw veggies and fruit, for example. Skip the beer and drink tap water. Don't buy frozen or canned food. There. Don't say your mother never does anything for you.

Back to the rest of you . . . What was I saying? Oh, bookish stuff. A lot of us are trying to read more deliberately, this year. I haven't actually read all that much, but it sure seems like I'm enjoying my reading a bit more. Over the weekend, I read The Making of the African Queen by Katherine Hepburn. I love the movie, so I enjoyed reading about the experience. I also finished They Were Just People: Stories of Rescues in Poland During the Holocaust by Tammeus and Cukierkorn. I have a feeling I'll have a lot to say about that book. If you're a fan of WWII books, grab a copy of They Were Just People. It is excellent.

Gotta go. I haven't used that nifty new treadmill for a few days. Enough moping around. It just makes the butt bigger, you know.

Bookfool, who will be watching old Chuck episodes but has watched some of the new season on Hulu and thinks, "Yes! Chuck still rocks!"
Posted by Bookfool at 10:43 PM