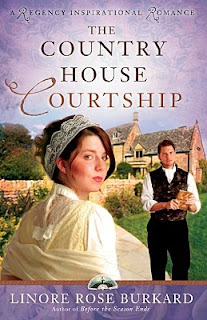 The Country House Courtship by Linore Rose Burkard
Copyright 2010
Harvest House - Regency Inspirational Romance
287 pages
Includes discussion questions and Regency glossary
Five years after the wedding of Ariana Forsythe to Phillip Mornay, aka "the Paragon", Ariana and her husband are still madly in love and the proud parents of two small children. At their manor house in the country, they have a number of guests; among them, Ariana's sister Beatrice and their mother, Mrs. Forsythe.

Beatrice is sixteen and eager to come out in society, so she spends a good deal of her time trying to persuade Ariana to move her household to London in time to chaperone Beatrice during the Season. Beatrice is convinced that with her sister's connections (spelled "connexions" in the book), Beatrice is practically guaranteed a wealthy match -- if not one to a man so well off as the Paragon, at least to a man of means who will keep her in style.

Mr. Peter O'Brien arrives to request a position at Glendover vicarage, although he assumes the errand is a waste of time. The vicarage is on the Mornay estate; Phillip and Peter have a history and it's not a good one.

The Prince Regent, meanwhile, wants the Paragon on his side, politically, and has offered him a Viscountcy. Phillip has not responded and the Prince impatiently sends a man named Tristan Barton. Barton has rented the nearby Manor House, where he hopes to hide away his pregnant sister, whose beloved, a Lord, has spurned her at the insistence of his parents.

There may be some minor spoilers in this section. I'm not sure if there's anything that will ruin the reading, but just in case . . . . consider this fair warning, if you please.

With two eligible men hanging about the country manor house, Beatrice finds herself in an interesting position. Mr. Barton appears to be a man of means and expresses an interest in her almost immediately. Little does she know, the man has an ulterior motive; he believes that to be connected in any way to Mornay can only be helpful to his reputation and he needs plenty of help. Barton has already gambled away his family's estate and is the reason for his sister Anne's ruin.

Mr. O'Brien is a kind, gentle man of the church but all Beatrice can see in him is a future with strict limitations, even when he is offered a position as vicar of nearby Warwickdon. The vicarage is charming and near her sister's large estate, but it's small by comparison. Surely, Beatrice can do better.

I think it's safe, now. You can come down out of the tree. Careful, now. Don't scrape your knees.

When a deadly fever makes its way to the estate and Ariana must be confined alone to prevent the spread of illness to her children and guests, the characters of the two men are revealed. But, Beatrice is stubborn. Will she choose the right man? Or, will Beatrice end up the wife of a gambler who intends to marry only to secure a better position?

is, at least on the romance end, predictable because it's a romance and obviously, nobody's going to be happy with a drearily-ever-after ending. Romance must end with true love. However, to get to the end point, there are plenty of interesting developments in this story. It didn't seem to me that there was a whole lot of plot; but, on reflection, I can see that a lot happened and I was immensely entertained. The Country House Courtship was the perfect book for me, this week. It's light, romantic, sometimes funny, adventurous and clean.

The word "inspirational" in the description means there is some emphasis on Christianity and God, but I don't think the author waxed religious often enough to offend anyone who just wants to read a sweet romance. I liked the characters I was supposed to like, felt a pang for poor Anne, despised Mr. Barton. It was fun reading and I highly recommend it to romance and historical fiction fans. A small glossary at the back of the book helps to clarify some historical information about the Regency time period. The book takes place in 1818 in Middlesex, England.

- Entertaining, romantic, well researched and pleasing. There were occasional moments when a modern word or phrase sneaked through, but I don't think Linore Rose Burkard is shooting for a place as the new Georgette Heyer. There's enough authenticity to convince without so much as to become a burden. The predictability was offset by plenty of interesting developments that were unexpected.

is the third in a series. It is not necessary to read the books in order as each story stands alone fine, but I think doing so adds to the enjoyment as the series does have a continuing set of characters.

Still madly cleaning, tidying, shifting in anticipation of this weekend's visitors. It's great. We're finding square footage that has been missing for years. Also, we are awaiting the arrival of a kitty tree and Fiona is rather desperately climbing anywhere and everywhere, in the meantime. She is one heck of a fine jumper. And, boy, can she make a mess.

I'm reading slowly because of chores and our weekend will be eaten up by family fun, so I anticipate returning to blogging and blog-hopping (which I finally managed to at least start, yesterday) by Sunday or Monday.

Bookfool, up to elbows in dust and very happy about it