The Last Surgeon by Michael Palmer 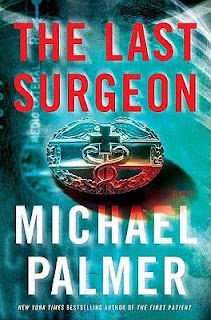 Gillian Coates didn't believe the police when they said her sister's death was suicide. Nick Garrity is determined to find a missing war buddy with Post-Traumatic Stress Disorder. Both believe something very wrong is going on, but they're in for a monstrous surprise . . .

A man who takes pleasure in making murders look like suicides or accidents:"non-kills," he calls them. A very evil man is taking lives. People are dying, but nobody has connected the dots and more lives are in danger. Can Nick and Gillian figure out the connection before it's too late and the last surgeon is gone?

I'm going to lean more toward sharing my thoughts about this book than reviewing the content, for once. The killer in this book has been compared to Hannibal Lecter of Silence of the Lambs in at least one review. I've successfully avoided both the book and movie versions of Silence of the Lambs, although I enjoyed Thomas Harris' Black Sunday, many years ago. I like Harris' writing and that is true of Michael Palmer, as well; I just don't like reading about characters who are pure evil. So, that was one (probably unfair) strike against The Last Surgeon. I don't take pleasure in reading about the kind of character Gillian and Nick eventually had to face.

Second strike - I had just finished reading Mass Casualties by Spc Michael Anthony, a memoir about the time Anthony spent working as a surgical assistant in Iraq, when I began reading The Last Surgeon. There were some discrepancies between the way Anthony described his experience and the fictional account of Nick's time as an Army surgeon in Iraq by Palmer and they really bugged me. So, the first time I attempted to read The Last Surgeon, I didn't get very far. I needed time to let go of reality and step into a fictional world.

The wait didn't help. I think I can safely say it's a rare "thriller" that I find thrilling, these days, (strike three) and The Last Surgeon simply didn't do it for me. I did finish the book, although I considered abandoning it several times. And, this in spite of the fact that the ending is quite satisfying, as the bad guy gets payback involving a suitably torturous amount of pain. This book just wasn't the right one for me, at least at this moment in time.

I'm going to skip the rating because I would rate it as I felt, not by content, and I don't think it's a terrible book, although it's definitely a bit contrived. An average read that requires a heroic amount of effort to suspend disbelief (which I didn't manage to summon), I found it implausible in many ways. But, that's not always a problem. Sometimes I'm able to put up with implausibility for the sake of entertainment. In this case, it appears that the evil character bothered me enough that I wasn't able to let go of disbelief and just enjoy the book.

While this book didn't do much for me, thriller readers who don't mind an extremely scary killer (and those who enjoy being creeped out) may enjoy The Last Surgeon. My personal favorite by Michael Palmer is an older title, Flashback. I read it so long ago (the copyright date is 1988 and it was reissued in 1995) that there's no review at this blog, but I remember it made my heart pound. My thanks to the author and St. Martin's Press for the review copy of The Last Surgeon. 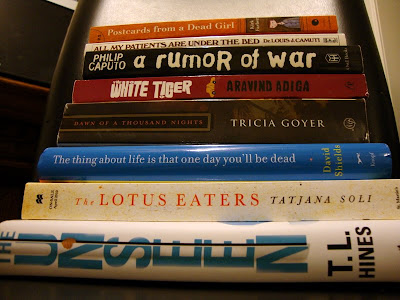 I don't do Mailbox Monday posts because I'm too forgetful, but at least I've remembered to keep the last two weeks' acquisitions together. Top to bottom (this is apparently the point at which the spacing gods freak out):

Postcards From a Dead Girl by Kirk Farber - from HarperPerennial

All My Patients Are Under the Bed: Memoirs of a Cat Doctor by Dr. Louis J. Camuti (from PBS)

White Tiger by Aravind Adiga - Recommended by a nice British fellow whose reading I rudely interrupted in Costa Rica because I wanted to know what he thought of the book (from PBS). He politely told me it was excellent.

The Lotus Eaters by Tatjana Soli - I asked to be squeezed into the blog tour for this one and the author very kindly agreed to squishing me in. (from author for TLC Book Tours)

The Unseen by T. L. Hines - I have no idea how I came across this one in the first place, but it was on my wish list and a copy became available. (from PBS)

Not shown in photo: Cesar Takes a Break by Susan C. Thoms, Illus. by Rogé - for the Sterling Listen-Along Storybook promotion, which I'll be talking about tomorrow. It's a very cute children's book about a classroom-pet iguana who must occupy himself when the students are away on vacation. (from Sterling Kids)