The Lotus Eaters by Tatjana Soli 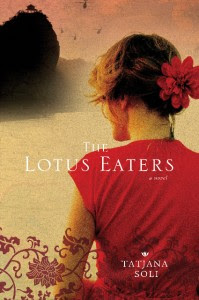 Helen Adams has spent a dozen years in Vietnam, an American photojournalist who arrived in the country knowing little about photography but determined to succeed. Now, Saigon is falling and foreigners are rushing to evacuate.

Helen finds herself torn. She has come to love the country and the men who shared this war with her. As she and her injured lover hurry to safety, Helen reflects back upon her years in Vietnam, the fear and triumph, love and horror. Will she make it out of this country alive? ***

***Note: There is a small inaccuracy in this description to avoid spoilers. The book jacket for my ARC also shares this inaccuracy, although the description above was written in my own words.

There are so many adjectives to describe this book that I'm not quite sure where to begin. Helen is a fascinating character. Why would a woman leave the safety of home for the muck and horror of a war zone? I think that would be a bit of a spoiler, actually, but Helen has her reasons. Yet, the reality is a shock to her and I think that's why the The Lotus Eaters is the kind of story that really sucks you in.

When Helen arrives in Vietnam, she's more frightened than expected; and, Tatjana Soli paints a portrait of Helen with a great deal of emotional depth and plenty of grit. She doesn't tiptoe around the terror and gore of war. Yet, the story is not all harrowing and gritty. It's also about love and loss, devotion and betrayal, beauty and regret. It's about the contrasts -- an exotically beautiful country devastated by war; people who mean well but brush off horrible mistakes in order to survive; a woman in a man's world and the inner conflict she must deal with in addition to her battle for acceptance.

The Lotus Eaters is a hard read, simply because of its setting, but it's a deeply felt, truthful read. There is a ring of accuracy, a melancholy tone, and a haunting rhythm to the prose.

What I liked most about the book was that it felt real; I always had the sense that I was there with Helen. Helen, Sam and Linh, the three main characters, are well-developed and raw. At times it's almost as if you know them too well, so well it hurts. As with other books that are dark, I had to take breaks and read something a bit lighter for an hour or a day, now and then, but that's a good thing because the Vietnam War was, of course, clearly a long, drawn-out horror.

The one complaint I have with the book is that I thought the author's writing was a little too fragmented. I think it was deliberate, to evoke the harsh atmosphere. And, yet, at times I felt like the use of sentence fragments was less an effective tool and more an annoying intrusion by the author. I was a little too aware of Tatjana Soli telling a story, in other words. It's a small complaint, not worth dwelling upon.

4/5 - At once lovely and horrifying, an excellent tale of one woman's determination to make her way in a time and place filled with contrasts. Packed with the senses, you'll leave this book feeling like you were there. R-rated in its accurate descriptions of gore, but PG, otherwise. In spite of the war setting, there's not a lot of rough dialogue and while Helen almost always has a lover, sex is not described in detail.

My thanks to the author and TLC Book Tours for the advance reader provided for review. My copy will be traveling, soon, in a box that will go cross-country. I have no idea who will end up with The Lotus Eaters, but it will find a happy new home.
Posted by Bookfool at 6:54 PM