The Invention of Everything Else by Samantha Hunt 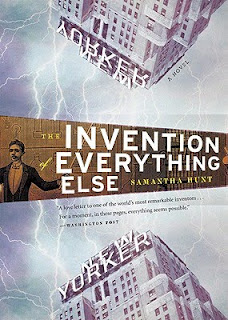 The Invention of Everything Else
by Samantha Hunt
Copyright 2008
Mariner Books - Fiction
257 pages, incl. notes

The Invention of Everything Else is a fictional account of a friendship between Nikola Tesla, the inventor who held the original patents for radio and alternating current electricity, and a young lady who worked as a maid in the New Yorker hotel. It's set primarily in the 1940's and it's . . . a little weird. But, it's also rather lovely, in its way. Occasionally, the story goes backward in time to fill in a little bit of historical background about Tesla.

Tesla was a Serbian engineer who moved to the U.S., lived in hotels, never married, was obsessed with his inventions but thought they belonged to the world, loved pigeons and considered one particular pigeon his wife. He was friends with Samuel Clemens, aka Mark Twain, whom he refers to as "Sam" in the book. The author used an actual incident that took place with Clemens in Tesla's lab in the book. Hunt really did imprint her fictional tale upon the reality very nicely but there were times that I didn't quite understand why the book went in a particular direction and I think perhaps that has to do with my lack of knowledge about Tesla.

Tesla was obviously an unusual fellow. I thought he was decently portrayed as a man who lived for science and never stopped thinking of new ideas but who became more bizarre as the years passed. I liked the fact that he wasn't described as simply obsessed; he was very emotional about the theft of his ideas and the cruelty of man. It would have been easy to portray him as completely lacking in emotion, but Samantha Hunt did her homework. He was apparently a man of extreme highs and lows; and, the author made it clear how easy it would be for a man who was basically jerked around, considered flaky if not totally alien, and certainly misunderstood to eventually withdraw and think of pigeons as his best friends.

Louisa, the hotel maid who "befriends" Tesla in the book, is totally fictional. Louisa accidentally becomes acquainted with Tesla because she's a snoop. She closes the door whenever she cleans a hotel patron's room, although she doesn't steal. She's just interested in the lives of others and likes to read their papers, peek in their drawers and suitcases, and so forth. When Louisa reads some papers in Nikola Tesla's room, she gets caught. But, Nikola and Louisa have something in common: Louisa keeps pigeons.

I enjoyed The Invention of Everything Else until about the last third and then it became increasingly baffling. What I think the author was trying to say was that Tesla was used and misunderstood which led to the financial ruin, isolation and emotional mess of his later years. At any rate, in the book there's a friend of Louisa's father who claims to have built a time machine, a young man who seems to show up wherever Louisa goes (whom her father's friend claims she'll one day marry) and . . . well, I'm just not sure what was going on toward the end.

What worked best for me was the portrayal of Tesla as an aging man, reflecting on his life, knowing he's nearing the end of his years, sad and hurt about the many betrayals that have led him into deep debt and alone with piercing regret, his only friends the pigeons he cares for on his windowsill. Tesla's story was obviously fictionalized but the author did a fine job of bringing his story to life.

What didn't work was the wholly fictional story overlying that history. Louisa was interesting and I liked the relationship between Louisa and her father, but I didn't feel like the friendship between Tesla and Louisa was developed enough. The story of their friendship, in fact, degenerated and became a little too hallucinatory for my taste in the end. Throughout the book, however, Tesla's story remained fascinating to me, if at times inscrutable and there was never any point during which I considered abandoning the book.

3.5/5 - Lovely writing, interesting and apparently very accurate historical framework -- I did feel like I learned a great deal about Tesla. A marvelous work of writing that lost something as it neared the conclusion.

I think I'm just in the midst of a blogging slump because I usually don't have as much trouble writing about books as I have in recent weeks. Generally, you can't shut me up. Also . . . a new oddity . . . like every other book I've recently read, I seem to have come up with plenty to say about The Invention of Everything Else the moment I turned off the computer. How distressing. Let's blame the time change, shall we? I've finished two more books and hope to review those, along with a nice little pile of children's books, soon.

I recieved my copy of The Invention of Everything Else from the publisher, via Shelf Awareness. My thanks to Mariner Books. I will pass my copy on to a happy new home.