Okay, just one of us ate yarn but we were all pretty crazed, this weekend. 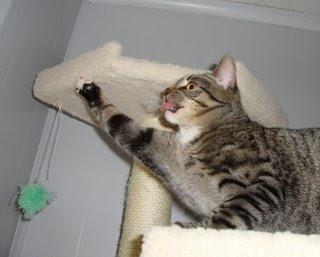 There hasn't been a great deal of posting going on around here because I was sidelined by an 8- or 9-day migraine (I lost count) that went through the weekend. Layered over that bit of joy was some teen angst as the Kiddo helped his father do yardwork and came down with a raging case of poison ivy. He overslept the Saturday clinic hours and even our insurance company, with a toll-free hotline and a book-sized list of preferred and non-preferred providers could not find a single clinic open on Sunday -- including within the Jackson metropolitan area (the Big City).

Call us the House of Whine. I slathered the Kiddo with some old prescription-strength cortisone that I happened across, doped him with benadryl and we all piled in the car to go to Jackson for a distraction because even the on-call doctor had told the messaging service not to accept anything but "serious emergency calls", meaning, "Have him meet me at the hospital"-type calls. Sheesh.

These books just came in the mail, which helped to assuage the misery of coming off the weekend -- seriously, we're still working on calming down. Especially the cat. 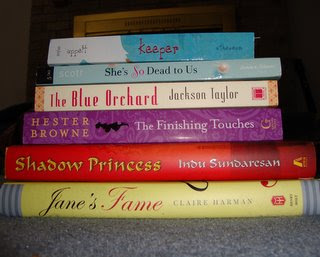 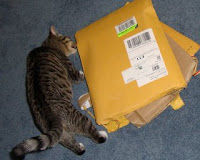 She's So Dead to Us - Kieran Scott

Shadow Princess - Indu Sundaresan (all 5 appear to be from Simon & Schuster, if the cat and I did a halfway decent job of reading -- and sniffing - the envelopes)

Dead End Gene Pool by Wendy Burden (from Lisa at Books on the Brain) showed up shortly after that stack. And, I got a little pile from a wonderful blogging buddy whose enthusiasm makes me look like I've been dipped in blue funk. They included:

Should I admit that as soon as the big pile of books arrived, I promptly spilled my drink and had to blow-dry my copy of Keeper? No, probably not. Hmm, the floor still feels a bit sticky, too. Better fix that.

Since that migraine lasted nearly all last week, I only managed to finish a single book (not including the children's books I reviewed -- all of which I've read at least twice) and that was The Lotus Eaters. Since I reviewed it, I'm only two book reviews behind.

Benjamin Pratt & the Keepers of the School by Andrew Clements is one. In fact, let's just get this over with, shall we?

Subtitled, "We the Children", Benj. Pratt, etc. is the first in a series for middle readers. Ben is thrust into a mystery when the school janitor hands Ben a special coin whilst having a medical crisis and then the janitor is hauled off to the hospital, where he dies. A developer has his sights on the school's prime waterfront property and plans to tear it down, but there are secrets in the school and Ben is the new keeper. He and his best friend must unravel the mystery while he deals with trouble on the home front (parents who have separated; spending time in two different homes).

What I loved: The story is adventurous, gripping, clever and fun. Benjamin's best friend is a girl and she's really the brainy one.

What I disliked: It's one of those books that just ends abruptly, apparently as a lure to continue the series. I hate it when a book doesn't end. It's not necessary to torment people to get them to purchase a second book. Also, there's a good bit of throwing up -- it can be gross, at times. I just ignored that.

I'd rate it a 4.5/5 for the storyline (ignoring the yucky bits) and 2/5 for annoying non-ending, which probably averages out to about 3.5 and gives you an idea how messed up a week of migraine can make a girl. Let's call it a 4/5. It was fun, after all, and clever.

Flyaway by Suzie Gilbert - the memoir of a wildlife rehabber who specialized only in birds and nearly worked herself to pieces. That will be next because I must post tomorrow for a book tour (and it was fabulous, so I hope I'll do a good job of describing it), but then I'll backtrack and review . . .

Postcards from a Dead Girl by Kirk Farber - One of the most entertaining, touching, quirky, funny, delightful books I've read in 2010. The author has agreed to do a guest post for my blog because I told him how much I loved his book and he's a nice guy, so that will probably show up Friday. Maybe Saturday because I have some really good potential Fiona Friday pics.

I think that's all, for now. I really do have to work on the sticky spot that keeps grabbing my socks and then I have to hop on the treadmill because I've been bad and it shows. Happy Tuesday!