So Long, Insecurity by Beth Moore 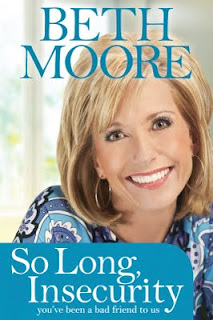 Insecurity is more than a complex emotion. It is a lie about our God-sanctioned condition. While something may cause us to feel sad, confused, angry, or threatened, we have the power to choose whether or not it gets to assault our security. When we decide to be strong willed about what God strongly wills, that, beloved, is the epitome of empowerment. The next time someone says or does something to you that has the capacity to dent your security, instantly think of one of these thoughts toward that person:

I read So Long, Insecurity several weeks ago and simply have been busy and distracted, hence the delayed post. You can read a preview chapter from So Long, Insecurity, here. I thought the book got off to a slow start, but once the author got past a good deal of introductory material about how she came to write the book and why she believes it's such an important topic, I was rather stunned at how meaningful the material was.

One of my favorite parts, on pp. 37-38, in which she lists some "false positives". She starts with a fill-in-the-blank:

This sentence leads into a full page of examples, such as:

. . . you're married to the most fabulous man in the world."

Prominent false positive: A great man would make me secure.

I think we all can say that at some point someone has told us they assumed our lives are perfect because of one false impression or another, so that resonated with me. As I was reading those "false positives", I thought of myself but I also often thought of friends who fit into each category. I know, for example, a drop-dead gorgeous woman who is stunningly insecure. The fact that she's beautiful really has nothing at all to do with her self-image.

Moore goes on to describe how women become insecure in the first place and she describes a number of scenarios that had never occurred to me. I felt like I learned a surprising amount about other females -- for example, why some women go out barely dressed in provocative clothing and high heels to places where they're asking for trouble. I never understood that mentality or the fact that it stems from insecurity, sometimes from acting out after sexual abuse. Nor had I heard the male viewpoint about women and their self-confidence or insecurity, which she asked for and repeated verbatim from their emails. It was utterly fascinating.

I thought this book was amazing. It's made me think twice about my inner dialogue, in recent weeks, and I'm planning to save it for at least one reread and pass it around to some friends.

4/5 - Solid, Christian self-help, directed specifically at women (but men could certainly learn from it, as well). Christianity is not a prerequisite for reading this book, but there is plenty of Bible scripture and Beth Moore is a Christian minister/speaker/writer, so those who are not Christian should go into it expecting the author's suggestions to be based on the Bible and Christian beliefs.

Bookfool in Green (but, actually, it's moss green)
Posted by Bookfool at 10:56 AM