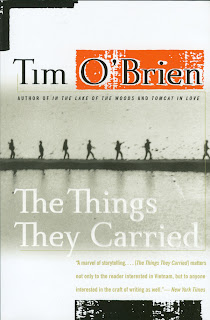 No more fantasies, he told himself.

Henceforth, when he thought about Martha, it would be only to think that she belonged elsewhere. He would shut down the daydreams. This was not Mount Sebastian, it was another world, where there were no pretty poems or midterm exams, a place where men died because of carelessness and gross stupidity. Kiowa was right. Boom-down and you were dead, never partly dead.

Briefly, in the rain, Lieutenant Cross saw Martha's gray eyes gazing back at him.

There were birds and butterflies, the soft rustlings of rural-anywhere. Below, in the earth, the relics of our presence were no doubt still there, the canteens and bandoliers and mess kits. This little field, I thought, had swallowed so much. My best friend. My pride. My belief in myself as a man of some small dignity and courage. Still it was hard to find any real emotion. It simply wasn't there. After that long night in the rain, I'd seemed to grow cold inside, all the illusions gone, all the old ambitions and hopes for myself sucked away into the mud. Over the years, that coldness had never entirely disappeared. There were times in my life when I couldn't feel much, not sadness or pity or passion, and somehow I blamed this place for what I had become, and I blamed it for taking away the person I had once been. For twenty years this field had embodied all the waste that was Vietnam, all the vulgarity and horror.

Now it just was what it was. Flat and dreary and unremarkable.

The Things They Carried is, quite simply, one of the most moving, beautifully written books I've ever read. The book opens up with a literal description of the things Vietnam soldiers carried, from weapons and ammunition to Bibles, photographs, tranquilizers and memories of home.

As the book progresses, the reader gets to know the characters. Although The Things They Carried was originally written as a series of short stories, it's not jumpy or rough. It reads like a novel, in my opinion; the characters are consistent throughout. As in reality, some die and are replaced; and, the book jumps forward and backward in time. But even the dead remain in the minds of their friends and in that way often continue to make appearances.

I've had a little trouble putting my thoughts about this book into words, so I'm going to do a self-interview between I and Myself for the rest of this review.

I: What led you to read this book? And, why does the world seem to be conspiring against the writing of this review?

Myself: Primarily the Vietnam War Reading Challenge and I don't know, galdernit, but there's something weird going on. Every time I sit down to type, the phone or doorbell rings, someone sits down to talk to me or decides to read jokes aloud for an hour (Kiddo) . . . shoot, even the cat distracted me by falling out of her chair.

Anyway, I've had a copy of The Things They Carried on my shelf for many years but it probably would have sat around, eventually growing green fuzz, if not for this wonderful challenge. Many thanks to Anna and Serena for the nudge.

I: Ah, yes. Nudges are good. Poor kitty. She's got to quit hanging her head off the side of the chair like that. What did you like about The Things They Carried?

Myself: Everything. It's a literary masterpiece -- the writing is just breathtaking. The characters are three-dimensional, vivid and real enough that I still occasionally think about them, although it's been several weeks since I finished the book. The author did a fabulous job of hitting the emotional aspect of going to war, fighting a battle that he didn't understand and which was so unpopular that men often took their own lives when they returned home. There were many tears but at times I smiled. It's a deeply moving account of not only what it was like to serve in Vietnam, but also how he felt when he was drafted and considered fleeing to Canada, why he chose not to run, how he eventually became hardened while others fell apart.

I: Was there anything you disliked about the book?

Myself: I have absolutely nothing negative to say about this book. It's a hard read because of the subject matter but I don't think that's a bad thing. In fact, I think it's an important book. Several people I've talked to or who have left comments, here, have mentioned that The Things They Carried is "not for the faint of heart" and that is certainly true. It can be graphic and horrifying, but it's graphic only in a way that it must be, if that makes sense. It's a truthful book.

I: What did you think of the characters?

Myself: They were almost visible entities; it would not be surprising if they walked out of the pages of the book -- that's the caliber of writing we're talking about. Kiowa was my favorite character, a Native American who carried a Bible, had a huge heart and a great sense of humor . . . and came from my home state. I was not surprised to find that he (although fictionalized, and I can't say to what extent) was the author's best friend. He was portrayed with deep affection while others were sometimes described as callous or childish or immoral. I'm not sure if the author meant to say so, but I think in his way he made it clear that an individual's true character shows in a situation as stressful as war.

Myself: The highest. Just tell everyone to read The Things They Carried by Tim O'Brien.

Myself: Yes. The end. Finis. More reviews forthcoming in the next few days, I hope. We had a lovely weekend with son and future daughter-in-law but that blankety-blank "spring forward" business has made us a wreck. Nightie-night, all!