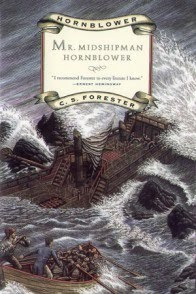 A little background as to why I read this book. My husband and I got a boxed set of "adventure movies" by the A & E network for Christmas and the first 4 of the Hornblower movies (there are 8) were included in that set. We watched them on laundry-folding nights. Seriously, that's what we do. We make huge mountains of clean laundry and then spend an evening folding and watching a movie. I had only seen bits and pieces of the series, in the past, when my husband watched them. He's seen them all and read most of the books.

Well . . . Ioan Gruffudd, Robert Lindsay, Jamie Bamber, Paul McGann . . . seriously, the movies would have had my approval if you'd just held up a photo of those guys in costume. Hornblower has an awesome cast and the movies are beautiful, adventurous, impressively acted. I just loved them. This is funny because my husband always thought they'd be far too violent for my taste. 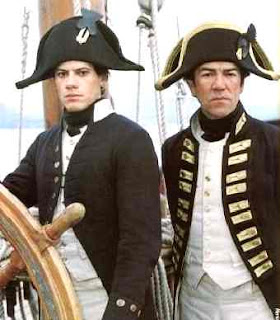 After we'd watched the first 4 movies, I went in search of the next 4. Meanwhile, having discovered that I don't just find the stories tolerable but I'm, in fact, wild about the adventure, I went in search of Mr. Midshipman Hornblower. We had a copy, but who knew where it had disappeared to? My husband, as I've mentioned before, is Mr. Chaos and the Hornblower books are his.

He gradually located most of the books -- 8 out of 9 of them -- but never did manage to find the first in the series (by order of Hornblower's experience, not the order in which they were written, as they weren't written from Midshipman to Admiral in timeline order).

I got online and found a copy was available at PaperbackSwap. Then, I had to wait for its owner to dig out from under the snow because he was stuck at home (in Washington, D.C.) during the big blizzard and the book was at his office.

Finally, I got my hands on the book and read it. And, it is every bit as wonderful as I'd imagined and then some. I found myself wanting to quote entire pages. C. S. Forester was a witty man and some of the lines in the movies are taken straight from the pages of the books.

A handsome young man in a plum-coloured coat with a lace stock greeted Hornblower when he stepped on the deck.
"Welcome, sir, to the Pique," he said in French. "I am Captain Neuville, of this privateer. And you are--?"
"Midshipman Hornblower, of His Britannic Majesty's ship Indefatigable," growled Hornblower.
"You seem to be in an evil humour," said Neuville. "Please do not be so distressed at the fortunes of war. You will be accomodated in this ship, until we return to port, with every comfort possible at sea. I beg of you to consider yourself quite at home. For instance, those pistols in your belt must discommode you more than a little. Permit me to relieve you of their weight."
He took the pistols neatly from Hornblower's belt as he spoke, looked Hornblower keenly over, and then went on.
"That dirk that you wear at your side, sir. Would you oblige me by the loan of it? I assure you that I will return it to you when we part company. But while you are on board here I fear that your impetuous youth might lead you into some rash act while you are wearing a weapon which a credulous mind might believe to be lethal. A thousand thanks. And now might I show you the berth that is being prepared for you?"

Don't you love the language? Even more impressive and lovely are the manners.

"Mr. Hornblower!" said Eccles. "My respects to the captain, and we're ready to get under weigh."
Hornblower dived below with his message.
"My compliments to Mr. Eccles," said Pellew, looking up from his desk, " and I'll be on deck immediately."

Of course, there are plenty of light moments in between adventures at sea and on land.

Midshipman Hornblower was walking the lee side of the quarterdeck, as became his lowly station as the junior officer of the watch, in the afternoon, when Midshipman Kennedy approached him. Kennedy took off his hat with a flourish, left foot advanced, hat down by the right knee. Hornblower entered into the spirit of the game, laid his hat against his stomach, and bent himself in the middle three times in quick parody ceremonial solemnity almost without trying.
"Most grave and reverend signor," said Kennedy. "I bear the compliments of Captain Sir Ed'ard Pellew, who humbly solicits Your Gravity's attendance at dinner at eight bells in the afternoon watch."
"My respects to Sir Edward," replied Hornblower, bowing to his knees at the mention of the name," and I shall condescend to make a brief appearance."
"I am sure the captain will be both relieved and delighted," said Kennedy. "I will convey him my felicitations along with your most flattering acceptance."
Both hats flourished with even greater elaboration than before, but at that moment both young men noticed Mr. Bolton, the officer of the watch, looking at them from the windward side, and they hurriedly put their hats on and assumed attitudes more consonant with the dignity of officers holding their warrants from King George.

Yeah. That means I loved it and I plan to read the entire series. Highly, highly recommended to any and all. There are plenty of nautical terms but I had no problem with them, although the occasional scene only partially made sense. That's because I didn't bother to retrieve our nautical lexicon (which I gave to my husband when he was reading Patrick O'Brien's Aubrey/Maturin series). They didn't last long and don't dominate the book; the stories are very readable. I can't say enough positive things about this series, even after having read only the first in a series of nearly a dozen.

I was very, very distracted whilst writing this post because I kept looking up photos of the cast. If you haven't seen the movies, I also highly recommend them. There's plenty of graphic violence (lots of screaming and moaning during battles and a good bit of blood) so you might want to watch them after the kids are in bed, but they make laundry-folding a bold adventure.
Posted by Bookfool at 8:28 PM