An Abundance of Katherines by John Green: mini-review and quotes 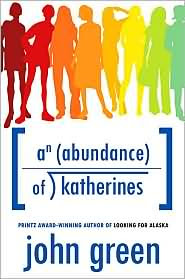 Because I loved the book so much I want to own it (like I need more books -- but this one's worth a few rereads) I've decided to share a handful of quotes from An Abundance of Katherines. It's a library check-out, so I don't feel obligated to review this one but it's such a fantastic book that I hate to just skip it entirely. So, before I return the book to the library, a brief descriptive blurb with a few quotes.

An Abundance of Katherines by John Green is the story of Colin, a child prodigy who desperately wants to turn his prodigious young self into a grown-up genius. Dumped 19 times, each time by yet another girl by the name of Katherine, Colin is fed up and depressed. To cheer him up, Colin's goofy friend Hassan suggests a road trip. During quiet moments, Colin decides to work on a formula that will predict how long a relationship will last by graphing all of his Katherine break-ups. But, in the process he discovers a few surprising realities about the world and both Colin and Hassan learn some life-changing lessons.
I don't feel like I'm describing it well enough, actually. An Abundance of Katherines is hilarious. Okay, so on to the quotes.
Crying adds something: crying is you, plus tears. But the feeling Colin had was some horrible opposite of crying. It was you, minus something. He kept thinking about one word--forever--and felt the burning ache just beneath his rib cage.
It hurt like the worst a**-kicking he'd ever gotten. And he'd gotten plenty.
The moment Colin sat down, Hollis asked Hassan, "Would you like to say grace?"
"Sure thing." Hassan cleared his throat. "Bismallah." Then he picked up his fork.
"That's it?" Hollis wondered.
"That's it. We are terse people. Terse, and also hungry."
Colin had only been in a nursing home once. He and his dad drove to Peoria, Illinois, one weekend when Colin was eleven to visit Colin's great-great-aunt Esther, who was in a coma at the time and therefore not very good company.
Hassan laughed silently, and he seemed so amused by the situation that Colin felt okay laughing, too. "This is some fugging snow globe of a day," Hassan said. And then he raced forward about ten paces, cupped his hands over his mouth, and screamed, "I AM BREAKING UP WITH YOU!" Still, though, a goofy grin was on his face.
I loved this book. The characters are unusually three-dimensional, flawed, sensitive, funny, human -- just wonderful. I can't recommend it enough. Again, not for the pre-teens, but the teenagers and grown-ups who enjoy Young Adult books will love it.
Posted by Bookfool at 3:11 PM

Email ThisBlogThis!Share to TwitterShare to FacebookShare to Pinterest
Labels: books, some adult situations, YA