Album of the Damned by Paul Garson 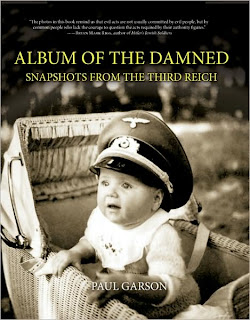 Album of the Damned is a glossy, beautiful picture book printed on quality paper that smells glorious when you turn its pages. But, it’s not your everyday coffee-table book. The cover of Album of the Damned is enough to stop you in your tracks. A baby wearing the hat of a Nazi officer? That’s the kind of image of Nazi Germany we’re not accustomed to seeing. The most common photos are stark, formal, horrifying -- scenes in which the Germans are obviously the evil overlords, herding Jewish prisoners like cattle at gunpoint or standing stiffly over skeletal prisoners.

Album of the Damned

contains a few of the traditional images, but it’s not the typical, cold and formal photograph that is Paul Garson’s focus. Instead, he shows the opposite, the playful, smiling, human side of life as a Nazi. Open the book and the first photo you’ll see is a grinning, dimpled man in Nazi uniform and greatcoat, reaching out as if to shake the photographer’s hand, block the lens or make a thumbs-up gesture. Behind him stands another Nazi with a curious look, a third saluting and smiling. Below the photo, the author’s words: “Welcome to the Third Reich”. A quote by Christopher Browning, author of Ordinary Men: Reserve Battalion 101 and the Final Solution in Poland reminds the reader that, “Explaining is not excusing . . .”

The 400 photographs in Album of the Damned are merely a small selection of the many photos Garson has collected. Most came from private photo albums and were taken by both soldiers and civilians. They were purchased by the author after he developed a private obsession that led him to collect entire albums, individual photos, personal letters, documents and newsreels. An extensive bibliography at the end of the book gives you an idea how much time and research went into the writing of Album’s text, which sometimes describes the photos but also leads the reader through the process of the growing Nazi mentality and its results -- begun by a few radicals, eventually to take over the minds and hearts of most Germans and those in many in other European nations. A few of the photos are professional photographs, but the vast majority are casual, informal photos of friends and family.

And, it’s that informality that leaves the reader stunned. Text describes how those relaxed happy people spent their working hours -- rounding up people considered inferior or dangerous in some way, guarding them as they were worked at slave labor on only 350 calories worth of food, lining them up against the wall and shooting them or leading them to gas chambers . . . then, going home to play with the kids or gathering for drinks and laughs. It’s that contrast between smiling faces in bathing suits or at sumptuous tables compared with the harsh reality of their murderous daily lives that shocks.

The book contains a timeline and is then divided into four parts, with an introductory section, “In the Beginning,” followed by “Part One: The Homefront”, “Part Two: Prelude to War” and “Part Three: The Battlefront”. The author adds a disclaimer reminding readers that the “accompanying text makes no claims at covering the subject matter in any complete manner” and that he “chose photos that ‘spoke’ to me and let them lead me where they would.” His interpretation of a few specific photos didn’t necessarily jibe with my own, but I understood his drift. The author’s objective was to show, through those photographs, how ordinary people can be indoctrinated into dangerous beliefs of superiority.

Through carefully written text and the chosen photos, Garson leads the reader to a deeper understanding of life as a Nazi and how all-encompassing the Nazi world became. A photo of a pre-Nazi children’s club is shown, followed by photos of boys in the Hitler Youth and young girls in the League of German Girls. A sample from a young girl’s letter shows how completely she was immersed in the thought that Jews were sub-human. Nazis are shown alternately cuddling animals and shooting them or horsing around with them. In one photo, two Nazis stand by as a man is attacked by their dogs.

--A photo of a happy young couple at their wedding, swastikas hanging over the altar behind them.

--A pair of portraits of a middle-aged couple. In the top photo, a wife stands behind a small balcony table, smiling as her husband intently reads Mein Kampf. In the bottom photo, the same couple at the same table, she pouring tea for her husband, who is now dressed in a Nazi uniform.

--Two photos of a tree stump with a hidden door carved into its side. In the first photo, a Nazi enters the door; in the second, the door is closed and one realizes the ingenuity and horror of this hidden sniper look-out.

The photos gradually become more graphic and disarming. Album of the Damned is not the kind of book you leave out where young children can flip through it. But, it’s the sort of book we all need to read -- a stark reminder of how easily people can become swayed into believing that one race or religion is superior to another, a memo to humans that evil may begin as a tiny germ and grow into a plague, a note to look about us and see that we haven’t necessarily learned the lesson the Nazis taught us.

This review will be posted in the December issue of Estella's Revenge. The book is so powerful and moving that I asked the editors if they minded if I cross-posted to my blog. I personally believe it deserves a great deal of exposure.