Flight to St. Antony by Tony Blackman and some mindless jabber that will undoubtedly raise your IQ 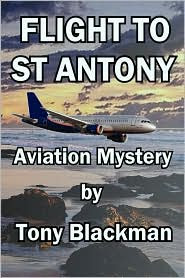 What led you to pick up this book? I like to read the occasional mystery (the more unusual or humorous, the better) and I love airplanes.

Describe the book without giving anything away. When a twin-engined passenger plane is forced to ditch within miles of a runway on the Caribbean island of St. Antony, aviation expert Peter Talbert is sent to investigate. Immediately, things become complicated as the crash recorder disappears, the presence of a drug lord on the plane is unearthed and survivors describe chaos in the business section not long before the crash. Peter must untangle the series of events that led to catastrophe while dodging drug runners, evading a murderer and falling in love with a survivor.

What did you like most about the book? This is not meant to sound bad, but my favorite part was the prologue -- the scene in which the stewardesses urgently prepare for ditching and then must work quickly to save as many lives as possible before the plane goes underwater. It's a nice, taut scene -- perfectly rendered, in my humble opinion. I read it while waiting for my son at school and didn't even notice his arrival at the car until I heard him open the trunk to put his backpack away.

Is there anything you didn't like about the book? I thought the writing was a little flat. There were moments of excitement throughout the book, but none had the intensity level of the ditching scene.

What did you think of the characters? Peter is a sharply intelligent, observant man. I liked trying to follow his train of thought, although I didn't always succeed. The book is fairly technical and his logic or conclusions sometimes evaded me. One thing that threw me was the fact that he often called people rude for mentioning that they've been warned that Peter is very direct. The author is British, so maybe mine is an American prejudice but I've never considered it rude for someone to say, "I've been told you're inquisitive," or, something of that nature. In fact, I consider it a bit of a compliment when anyone notices I exist. Otherwise, I thought Peter was an interesting character and I liked Helen, the flight attendant, as well. I thought they were a little needlessly gushy, calling each other, "My love" or "My dear," after only a day or two.

There is, in fact, a huge cast of characters and I was particularly grateful that the author added a "Dramatis Personae" at the beginning of the book. If the reader forgets a character's job title or can't place him, it's easy enough to flip back for a reminder.

Also: There's a list of acronyms and definitions at the front of the book.

In general: I liked the book, but I felt that it was lacking spark -- possibly because the dialogue seemed stiff to me. This is the author's 6th book (the 5th mystery; one of his books is non-fiction about his experiences as a Vulcan test pilot), but the first that I've read. Peter Talbert is a continuing character and I wondered if his character may have been fleshed out a bit better in previous installments.

Recommended? Yes, with a minor warning: The denouement is very sad. Once Peter uncovers the truth and discovers what happened on the airplane, it's hard reading. You can't help but imagine what it must be like for someone to really experience such a horrifying end. Otherwise, besides the fact that the writing is a little bland (if you're a lover of beautiful sentences, this is not the book for you), I thought the mystery was excellent and I enjoyed the way Peter slowly dug up the truth. I'd particularly recommend this book for people who love mysteries and find aviation fascinating.

Cover thoughts: I love airplanes, so just about all covers featuring an airplane appeal to me. I love the sunset and seascape in this one. It's very fitting, as the ditching of the plane takes place at night, near an island.

On this day in Bookfool's Reading History:

In 1997, I was reading Double Deuce by Robert Parker.
In 2005, I'd just completed The Reading Group by Elizabeth Noble.
In 2006, I finished Dispatches from the Edge by Anderson Cooper

We're busy getting ready for the holiday and I'll be shutting down for a few days. I hope to resume posting on Sunday and Wahoo! Wednesday will return next week.

New running joke in Bookfool's House -- or, What My Blog and Holiday Inn Have in Common:

With Lisa's help, I set myself up for Google Alerts because I have not always received notice when people link up to me for memes and awards, etc. I've found email alerts extraordinarily handy, thus far, especially given my scattered nature. This weekend I had an interesting surprise when I received a Google Alert that led me to this site: 100 Blogs that will make you smarter. Page down to see my blog listed at #80, the 10th blog in the "literature" category. According to the Indiana University Press Blog, Alisa Miller of Online Universities compiled the list. Thank you, Alisa!

Getting sociable -- and accidentally letting you know what I looked like 4 years ago:

How have I managed to squeak by without a membership in the Book Blogs social network? I have no idea, but I've recently joined and have been sending out friend requests to bloggers whose icons I recognize. I'm signed up under my actual name, Nancy, as opposed to the usual Bookfool moniker. And, I've even loaded a photo to this one! Unfortunately, I'm not quite that thin, anymore. You can visit me, add me as a friend, gawk at the photo or dump books upon my blonde crown, here.

And on that note . . . there are 34 recognized definitions for the noun "crown" and 10 verbs listed at infoplease. If you have a diamond-encrusted noun version that you're tired of looking at and would like to give me, I'll be glad to take it off your hands. But, it's going to look kind of funny when I wear it to rake the lawn.

Wishes for a Happy and Safe Thanksgiving to the Americans!

Bookfool, off to do some critical Pre-Thanksgiving Laundry
Posted by Bookfool at 12:59 PM