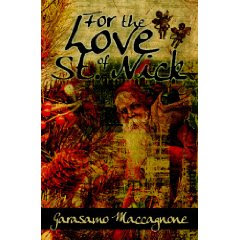 For the Love of St. Nick by Garasamo Maccagnone
Copyright 2008
Booksurge Fiction
44 pages

As if it were arranged, the Pastor of the Church, a Monsignor Sadowski, escorted our group of six men up the twenty-eight steps to the kneelers beneath the crucifix. "Boys. There's seven tons of Jesus up on that redwood." I recall the Monsignor saying. All the men glanced upward.

For the Love of St. Nick tells the story of Tiger and Johnny, two little boys who pray to St. Nick for the safe return of their father from a secret mission during the Vietnam War. Johnny is the sickly and weak child whose mother died giving birth to him. Older brother Tiger has seen his brother ill with high fevers so many times that he knows how to give little Johnny an alcohol bath, if necessary. A woman by the name of Mrs. Pennington takes care of them.

Before their father (whom they refer to as "the commander") leaves for his mission, the two boys and the commander's pilot buddies spend a day in the woods choosing a Christmas tree, playing a joke on one of the men, eating hotdogs and making snow angels. That was my favorite portion of the book. A friend and fellow pilot promises to buzz the boys' cabin to let them know the commander has safely returned when the mission is over.

At 44 pages, this is a quick Christmas novella with a little bit of magic. It could stand some editing, but the story itself is touching and sweet and just a bit scary, as the boys are left briefly without their caregiver and Johnny almost immediately develops a high fever. I don't think it's too much of a spoiler to say that it has an uplifting ending. While not the most brilliantly written story, I enjoyed it and think it's worth hanging onto for an annual reread. A part of me would rather frame it. Love that cover.

I was a little perplexed about the book's target audience, so I mulled for a couple of days. It has a beautiful cover that looks like it belongs on a children's book, but I think it's really for adults -- a tale of Christmas with a bit of nostalgia thrown in. The family is Catholic and prays to St. Nick, which struck me as rather odd but didn't offend me. I'd just forgotten that Catholics pray to Saints. I'm going to give this one a numerical rating, simply because I'm not sure I'm describing it well enough:

Up next will be a review of Flight to St. Antony, which I've still not completed. We had a very busy, productive weekend of purging and shifting furniture and boxes. But, by the end of the day I was pretty much too tired to crack a book open.

The one story I managed to get around to: The Gift of the Magi by O. Henry, a short story I consider a timeless Christmas classic. Here's the first paragraph:

One dollar and eighty-seven cents. That was all. And sixty cents of it was in pennies. Pennies saved one and two at a time by bulldozing the grocer and the vegetable man and the butcher until one's cheeks burned with the silent imputation of parsimony that such close dealing implied. Three times Della counted it. One dollar and eighty-seven cents. And the next day would be Christmas.

I think The Gift of the Magi -- a story of two people who give up their most important possessions, only to find the usefulness of each carefully chosen gift lost because of the other's sacrifice -- never loses its depth of meaning and is particularly relevant during a time of hardship for many. Not meaning to compare this to the book above, by the way -- it just hit me that I really appreciate this story, at the moment.

We didn't go anywhere, this weekend, so you get an older photo. Can anyone identify this bird, for me? I can't find my bird identification guide, at the moment. 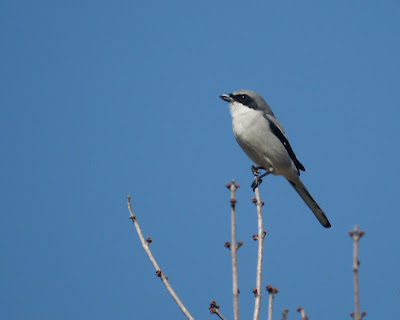