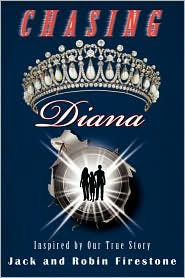 I've rewritten this first paragraph for clarity. Somehow, I managed to not mention that the Firestones were the only Americans present at Diana's fatal crash site.

I admired Princess Diana, as most folks did, and hoped that I'd learn a bit more about the circumstances of her death by reading this fictional account in the form of a screenplay, written by two Americans who were driven through the Alma Tunnel moments after the crash that killed Diana. Unfortunately, I didn't feel like the book said much of anything besides, perhaps, that the authors were pretty clueless as to what they'd witnessed and didn't have enough material to write a real book. After visiting their website, I'm not so certain about that. It does seem like they have plenty to say and there's a lot of information to be mined.

Because it's written as a screenplay, some people might find the format a little awkward to read. I've read screenplays in the past -- sometimes to compare a screenplay with a novel -- so the form didn't bother me. However, I thought the characters were a little cliched (sorry, don't know how to add an accent) and thinly veiled. The Firestone family becomes the Goodrich family, all of whom have given names that begin with the same first letter as their real-life names. James drinks heavily and pops pills; his brother snorts cocaine and wife Rhonda whines. Their son Ben is just kind of there.

From the authors' website, I learned that they made the Goodrich family deliberately dysfunctional and threw in people with guns to make the story more exciting. But, it didn't work for me. The bad guys were ever-present but inept. The Goodrich family was unlikable. Truly, I just wanted to know what the authors saw and didn't feel like I could honestly tell anyone the answer, after closing the book. One thing I think they did get across nicely was the pressure of being thrust into the spotlight. And, yet, even that was weakened by James' greedy desire for attention. This is one I struggled to finish. The interviews posted at their website are actually far more revealing; it would have been nice if they'd simply written an account of what they saw, what they believed to have occurred and why. Definitely not a Bookfool favorite. If you have reviewed this book, let me know and I'll add a link. I keep forgetting to do that.

Up next: A review of The Adventures of Songha, the Amazing Savannah Cat by Linda Caterine

I've been tagged thrice, in the past week, and I'm trying to figure out how to fit those posts in. To the taggers, I thank you and I beg your patience.

I don't do Monday Mailbox posts because I'm not particularly organized (hahaha -- ask my husband if I'm being too kind to myself) but I got a book that has me absolutely drooling, this weekend. Fear in North Carolina: The Civil War Journals and Letters of the Henry Family is a book I received to review for Estella's Revenge. It is absolutely driving me nuts having that book stare at me. Oh, oh, oh it looks fabulous! I'd never thought of journals in this way, but one of the reviewers in the promotional material that came along with the book called this book an excellent work of "social history". I've never heard that term, but I like it.

Must dash off to fetch the kiddo, again. He's nearly 17, but doesn't particularly like driving to school in the morning if he's tired. Not a problem. It's an excuse to get out. Later, later!
Posted by Bookfool at 10:22 AM