Two Brothers: One North, One South by David 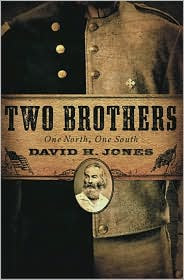 What led you to pick up this book? I was offered the opportunity to read it for a book tour and jumped at the chance, due to my newfound interest in the Civil War.

Describe the book without giving anything away. Two Brothers is a fictional story based on the lives of real characters. The emphasis is on the story of William and Clifton Prentiss from Maryland, who ended up on opposing sides of the Civil War -- William a Confederate and Clifton an officer for the Union. Walt Whitman befriended the mortally injured William as he lay dying in the same hospital where brother Clifton's wounds were being tended. After William's death, the elder Prentiss brothers join Walt Whitman at Clifton's bedside as Whitman describes the tales William shared during his dying days. Interspersed within the narration of William's experiences are the stories of several women who worked tirelessly to help supply the Maryland Battalion of Confederates with arms, uniforms, flags, mail from home and other essentials, often risking their own lives in the process.

What did you like most about the book? As in the case of any historical fiction, I enjoyed the learning process. There are many, many details about the Civil War to absorb and I've only recently come to understand why people dedicate decades to the study of the war and its players. I particularly enjoyed finding out that Maryland was a state with divided loyalties -- occupied by the Union but with many citizens who had ties to Virginia and thought of themselves as Southern. For some reason, I've always thought of Maryland as patently northern. Probably because it looks like it's way up on the map, from my angle (way down here in the Deep South).

Is there anything you didn't like about the book or topic? I found the prose rather heavy; it read more like non-fiction than fiction in that the characters, in their dialogue, spoke as if they were reciting details from a textbook. In particular, each character was at first identified by his or her entire name and title, regardless of how long it was (J.E.B. Stuart, for example as Colonel James Ewell Brown Stuart) and then often still abbreviated with a middle initial. All of the characters knew names, dates, places . . . things I would not presume that everyone could spit out at a dinner party. At one point in time, an important female character was rattling on about certain events and I thought in reality I could imagine someone walking up to her and saying, "Hetty, dear, you're being tiresome."

What did you think of the characters? In spite of their dialogue, I found that I cared about them and particularly enjoyed reading the little stories within their story, details that I presume the author mined from letters, news articles and other historical documents.

Just an aside: My own ancestry includes a set of brothers who fought on opposite sides of the Civil War. They lived in Missouri and, if memory serves me, I believe they were twins. Someday, I hope to dig through my mother's geneological treasures to locate the details.

In general: The use of too much historical detail is common amongst less experienced authors and I got the impression that was the problem with this book. I kept muttering, "Back story! Back story!" when it became overwhelming. If you can handle the fact that the characters are rather wooden because of overdone historical detail, it's worth reading for the information. I don't know how it would appear to those who have researched the Civil War and are already familiar with such detail.

Recommended? With reservations. I had difficulty finishing the book because I got bogged down by all those lengthy names and the dry dialogue. I would call it an average read -- not my favorite Civil War read, thus far, but I think it has its merits. There are certainly some exciting moments.

Cover thoughts: Love the cover, with half of a Confederate uniform and half Union. It tells you exactly what the story is about, as does the title. Also, the book is printed on good quality paper and has a nice, shiny cloth cover beneath the jacket -- with silver lettering and two flags on the spine. It's a really pretty book.
Posted by Bookfool at 9:51 PM