To Catch the Lightning by Alan Cheuse 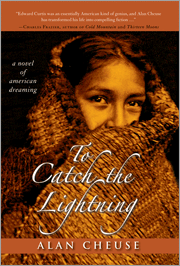 Our mules are laden high with supplies, and the beasts we ride are weighted down with our bodies. The sun is rising up over the eastern walls of this great and glorious declivity, a monument to time so vast that none of us can any more imagine it whole than the mayfly can picture the turning pages of a calendar. Cliff upon cliff leads away in ranks to the north and west, and yet it appears as though no dimension exists but the one in which we're standing. All else around us remains only an arm's length away. This makes me think of the childhood notion that one had only to reach out with a hand to snare a star.

I'm going to have to divert from normal review mode for this one. There's just too much I want to say about it. So, self-interview.

Me: So, tell everyone about the book, without giving anything away.

Myself: That's not a very original interview question.

Myself: To Catch the Lightning is historical fiction about the life of Edward Sheriff Curtis, the renowned photographer who made it his mission to capture photographs of Native Americans in every tribe in the United States, to record them before their ancient traditions and costumes disappeared.

Me: The viewpoints are important because my alter ego, I, tells me that you're a little perplexed as to the way this book was written.

Myself: Yes, definitely. There are multiple viewpoints. Rather than having Curtis describe his life in first person or from a more distant perspective, the author chose to show Curtis primarily via the viewpoint of William E. Myers, assistant to Curtis for many years. That's not a bad thing, in and of itself, but the author didn't stick entirely to the thoughts of Myers. Instead, he did what writers refer to as "head-hopping", describing how Curtis thought and felt, as well as Myers' own point of view. Sometimes, head-hopping doesn't bother me a bit, but in this case I thought the author's portrayal of his subject was a bit . . . presumptuous. It grated my nerves in a way that few books of this type do.

Also, there is a second much-used narrator, Jimmy Fly-Wing. Jimmy was a Plains Indian who left his home and family, quickly learned English and became a scholar. Eventually, he crossed paths with the Curtis expedition. He seemed unable to find a place in either his native world or the city life of the modern European transplant.

Before I stomp all over the book, ask me about the good and please remember that I actually enjoyed the book but had a lot of problems with it, as well. So, hang in there.

Me: Will do. Tell us what you loved about the book.

Myself: I really enjoyed learning about the life of Curtis -- how the combination of an expedition to Alaska with some wealthy men in addition to some early experiences photographing Native Americans gave him the idea to capture on film way of life that was quickly disappearing. Also, his struggles to fund his expeditions and the angst of his marital troubles were interesting. Myers appears to have been a brilliant linguist and extremely dedicated to helping Curtis with his fieldwork; I found that I admired him and his efforts. I was also fond of Clara for her strength and business sense, although I thought Cheuse's portrayal of her was quite negative. For one thing, he describes her as not particularly attractive. I've looked her up online and I think she was lovely. Stylistically, sometimes the writing was lyrical and dreamlike.

Yes, and here is one thing that really, really annoyed me. The author frequently wrote lovely passages that were interrupted by common language -- as in vulgar choice of terminology. I thought his use of the vulgar destroyed the flow and the literary beauty of the book. This isn't a very good example of a nice passage, but this shows you a bit of the common language that intervenes:

I was a middle child, with two ahead of me, tall and strong boys, and two behind me, two, as it happened, mewling and puling girls. My brothers took care of themselves, and I looked forward to the day when I would live that way. The babies below me stayed on the tit and made for worries during the winters when it became difficult for them to eat and breathe.

The use of "on the tit" instead of saying that the children were breast-fed just jerked me right out of the moment. Bodily functions, in general, were described using common terms. I found them intrusive and out of place.

Me: So, what did you think of Cheuse's portrayal of Curtis?

Myself: I'm not trying to be picky, here, but okay . . . I'm a fairly obsessive amateur photographer, so I feel like I have an understanding of the process, the art of composition and the emotions involved in finding the subject matter, setting the scene, or simply capturing a moment. I thought that the meaning and, particularly, the joy involved in the process of photography were completely missing from this book. There's more emphasis on the spirituality of his experiences with Native Americans and the angst of his personal life (money trouble and friction with the wife), as well as the constant travel than of the photography. It also appeared that Cheuse diverted from the true time-line. I could be wrong about that, but in historical fiction I feel very strongly that one should use reality to frame the fiction and it certainly didn't appear that the bare bones were in the right places.

Me: Any other criticisms, She Who Picks Books to Pieces.

Myself: Sigh. Yes, one more. I had a strong feeling that the author intruded and forced his own beliefs on Edward Curtis. That is simply an impression and I could give you some specific examples of why I believe that, but I don't think it's worth going into. My opinion only. Also, I thought Jimmy Fly-Wing's story was just flat weird, even though he serves as an excellent example of the difficulty aboriginal people have in adjusting, when their customs and traditions are swallowed up by new ways and their land is stolen. I thought he treated the natives with empathy and the wife with contempt. Poor Clara had to have been a very strong woman, running the business and rearing children as a single parent most of the time, but she was portrayed as whiny and mean-spirited.

Me: So, would you recommend the book?

Yes, with slight hesitation. In spite of the many negatives mentioned, I wouldn't discourage anyone from reading the book. It's a breezy read, in many ways, and Edward Curtis was such an interesting man that it was really quite enjoyable to learn a bit about him. Aside from the fact that he took photographs of Indians, there wasn't really a thing that I could have told you about Edward S. Curtis before reading the book. To Catch the Lightning piqued my curiosity enough that I'd like to read more about Curtis (and have read a bit online). I've added Anne Makepeace's biography of Curtis, Edward S. Curtis: Coming to Light, to my wish list. I do think the author tried too hard to be stylish and went overboard, to be honest. I'd have liked a more straight-forward writing style.

Me: Do you think you'd read more by the author?

I: Not to intrude or anything, but I think it's rude and bizarre that you never include me in your interviews.

Me: Hey, you were mentioned way back at the beginning.

Don't you mean "I was mentioned"?

I: You guys are losing me.

Someone say this interview is over.

Me, Myself and I

More weirdness will be available for your reading pleasure in future posts. Hope you had a nice weekend!

Bookfool, who absolutely abhors that Daylight Savings Time "fall back" business. I like longer evenings, thank you very much.

Email ThisBlogThis!Share to TwitterShare to FacebookShare to Pinterest
Labels: book reviews, recommended with some reservations