Too gloomy for wahoos and finished a terrific book

Maybe I'll wahoo on Friday. Or, maybe I'll wait till next week, but I will definitely share some photos with you because it's pretty and photogenic outside, even if I feel like a total gloomy guts. It was fun getting a break from our piercing sunshine at first, but today is Day 3 of heavy overcast. Here's a shot of the leaves across the street, after yesterday's storm knocked them down. It was really quite lovely, after the storm ended, in spite of heavy cloud cover: 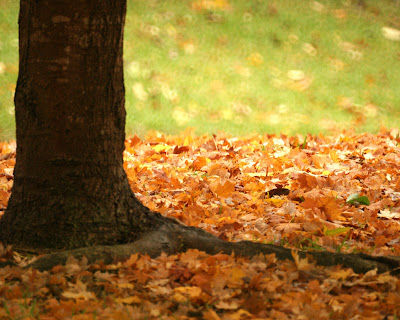 It's very possible that I'll never be able to live in the Pacific Northwest. My pale eyes and fair skin don't like bright sunlight, but I can't seem to function without it, after a few days. This next one looks like leaves in a river, but no . . . sadly, it's our back porch after the rain. You can see we had a pretty good downpour. 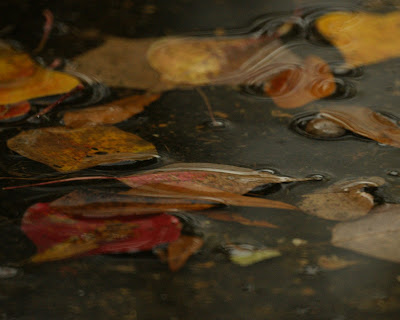 Down the street, a neighborhood dog (a very nice little guy; he's all over the place -- we have no leash laws, here) took advantage of an overturned trashcan and had a little feast along with some shredding fun: 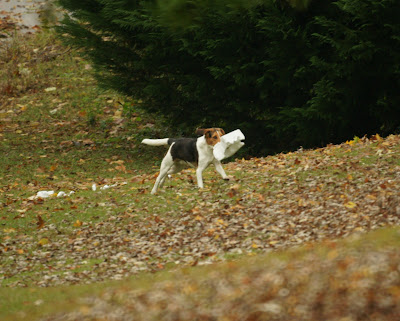 I just finished reading Baby Shark's High Plains Redemption by Robert Fate and it is just the most ridiculously fun book. Look for a very positive review of this one, hopefully by tomorrow. It's a crime novel with two private investigators -- Otis and Kristin (aka "Baby Shark") -- who are sent to fetch the girlfriend of an outlaw named Travis Horner from Oklahoma but end up getting chased by killers throughout southern Oklahoma and northern Texas.

Those of you who know me well are probably laughing about the name Travis Horner combined with Oklahoma. No, no, no relation!! He's a baaaaaad man. He is also fictional . . . and thank goodness for that.

I'm going to keep reading and re-reading Grit for the Oyster, for a while, so don't be surprised if it stays in my sidebar for weeks, possibly months. I wasn't kidding when I said it's uplifting. It just can't make the clouds go away. But, hey, it has a sunny cover. Maybe I should meditate on that cover, this afternoon.

Next up will be Two Brothers: One North, One South. I'm scheduled to review that one for a book tour, next week, and since it's a Civil War book I'm naturally very excited to finally have a reason to crack this one open -- it's been waiting for at least a month. I also plan to read Flight to St. Antony by Tony Blackman, an aviation mystery. I'm not a big mystery reader, but the atypical appeals to me in mysteries and I love all things aviation. Also, the author mentioned that his pilot hero has to ditch his plane in the Atlantic. Well, that did it.

I'm off to pick up kiddo, since it was supposed to rain and I'm over-protective. Normally, the kiddo is driving himself to school, now. Boy, that makes me feel old.

*Update* - I just read the prologue of Flight to St. Antony and I had it wrong. The "hero", aka protagonist, is an aviation expert and insurance investigator who must figure out what went wrong and why the plane had to ditch; few people survive the accident. The prologue describes the preparation and escape from the plane and it is intense. I didn't even notice when the kiddo walked up to the car. Usually, once the bell rings at his school, I can't focus to read with all those laughing teens walking past, if that tells you anything about how gripping that first bit turned out.

Hope everyone is having a terrific day! Happy reading!

Bookfool, who will work really hard on being chipper, next time