First, you get the Freaky, Big-Eyed Cat Photo because, frankly, I think this picture is hilarious: 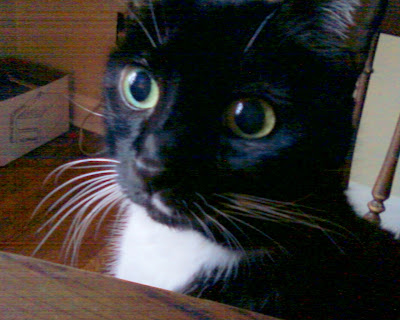 That's our Miss Spooky, sitting on a dining table chair at Eldest Son's apartment in Memphis, where the entire family -- cat included -- spent Thanksgiving. Spooky does have gorgeous, big green eyes . . . but I think it's the angle that makes this photo look so wild. I took that shot with my phone camera.

From Turkeygate by Craig Medred -- I love the opening line of this article:

"Is this a strange country or what?"

After reading about people trampling each other for bargains (honestly, nothing is worth trampling a person, in my humble opinion), the availability of Christmas ornaments made from reindeer droppings, and a woman who blogs about nothing but Brian Williams' ties, I'm inclined to agree.

Thanksgiving was a reading wash, although I had one sleepless night during which I began to gobble up Fear in North Carolina: The Civil War Journals and Letters of the Henry Family, Compiled and Edited by Karen L. Clinard and Richard Russell. How's that for a mouthful of title? I am absolutely loving it. Cornelia Henry had a wonderful matter-of-fact journal writing style, so one minute you're reading about her sewing projects, the weather, what a great man she married (although a bit soft-hearted) or what kind of illnesses are going around the area and the next minute you're reading about which states have seceded from the Union, followed by a remark about a troublesome drunkard or the joys of motherhood. Cornelia's journals are a pleasant hodge-podge and the book itself is loads of fun because it includes scads of other info -- documents like the Old Mr. Henry's will and photos of the family, copies of advertisements from the time period (1861-1868), etc.

Also, because I apparently overloaded on sad reading material, I have begun to read an incredibly funny book called Enslaved by Ducks by Bob Tarte, the story of how Tarte went from city-dwelling, pet-free life to country life with a startling menagerie. Ah, just the right amount of levity to get the squeaking, rusty brain cogs rotating, again.

We went to the Memphis Zoo and everyone became bored with my incessant photo-snapping, including the tigers: 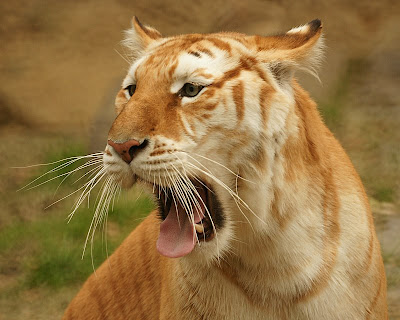 Yawwwn. Finally, even God became dismayed and sent rain around the same time Eldest left to avoid going into a coma. I did try to warn him that I'm not fun to hang out with because I take a million photos, but nobody believes me till they experience the pain of standing around waiting for me to move on to the next exhibit.

Many thanks to Eldest and Girlfriend for the delicious meal and to Eldest's Girlfriend for allowing me to paw through her sack of used books. I came home with two books and she didn't get a thing, although I have a bag full that I would have brought along with me if we'd had just a tiny bit more room in the car. Note to S: Just ask if I mention anything you're dying to read.

Hurricane of Independence by Tony Williams - but I haven't touched it in a week. I hope to get back to it, tomorrow. Because the hurricane was tragic, this book was one of the two I felt that I needed to set aside for a few days, but I'm enjoying it.

Waiting for Daybreak by Kathryn Cushman - A very quick read, which I will probably finish tonight, Waiting for Daybreak tells the story of a pharmacist whose life was dramatically altered by a single error (this one's fiction). Now, working at a new job in her hometown and trying to help her parents pay for her mother's expensive experimental cancer treatment, Paige faces an entirely new set of dilemmas. I love Kathryn Cushman's writing style.

The Pages in Between by Erin Einhorn - Another I haven't touched in a week, but plan to get back to reading, very soon.

Grit for the Oyster - Still loving the uplifting messages in this book. Even though I'm not currently writing for publication, I've found that this book is very inspiring and I've finally begun to think, "Maybe I can get back to writing the way I used to." I highly recommend this book for Christian writers who need encouragement.

Wow, not a single patrolman. I was shocked, especially given the weather on the drive home and the fact that a lot of people were driving with serious lead feet. Here's what we ran into on the return trip: 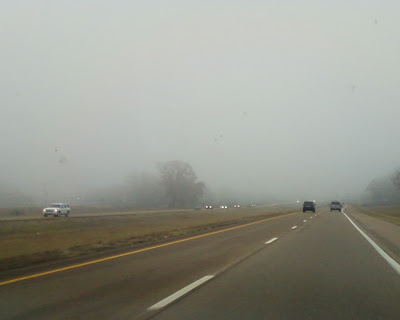 That's another phone photo. I'm just as obsessive with the phone camera as I am with the SLR. You should see my Pop Art (a photo of a soft drink cup with a straw jutting out to the side -- well, I think it's cool).

Off to bed with me. Nighty-night!
Posted by Bookfool at 3:54 PM