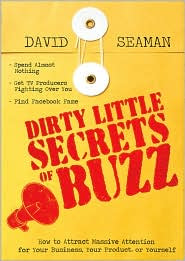 The core ingredients of buzz are easy to grasp: Outrage and great content. People want a killer story they can gossip about with coworkers the next day and get different, passionate opinions; television producers want to be the ones who presented this story to these viewers; and blog editors want the credit for creating the early interest and getting the TV producers interested. This is obviously a huge oversimplification of the buzz ecosystem, and it doesn't always work this way, but you can see the rough outline of the process. You can also see how buzz benefits everyone involved--the person it concerns, the blogs that launch it, and the television shows that capitalize on it.

I think it's possible to be outrageous and still have moral grounding. Without this, people may talk about you, but they won't trust you. And this lack of trust means that nobody really cares about what you have to say. This is the difference between Ann Coulter and someone like Bill Maher. Both of them say shocking things; both of them get a tremendous amount of media attention. But if you look at Maher's comments over the years, they're consistent. They make sense--and they promote certain clearly defined agendas (he hates hypocrisy, conservatives, and the fact that weed is still illegal). Ann Coulter's comments, in aggregate, don't really make sense: She hates whatever will get people talking about her.

This may seem like odd reading material for a person who can't stand the thought of drawing attention to herself, but I have a business degree and the business side of me is absolutely fascinated by marketing--what works, what captures attention, why people sit up and listen or place that item in their carts. And I do believe David Seaman, the man known for his "Free Paris" (as in Paris Hilton) campaign, has a unique take on how to capture attention. He calls it "buzz whoring" or "publicity whoring". The author admits up front that the book has a slightly amoral tone. Yet, he also advocates drawing attention to yourself with integrity and frequently mentions that telling a story that's simply not true will backfire.

If you only get one thing out of this book, other than a finely crafted paperweight, it should be this: Controversy is good.

The quotes above are decent examples of Seaman's writing style: light, fun, intelligent and direct. He throws in a bad word, now and then, but nothing that jars you from the flow of the reading because it's just who he is and you quickly become accustomed to his voice.

I really enjoyed this book and found the author sharply observant and savvy. Excellent reading for those who are interested in publicizing a cause, a book, a blog, or just about anything. There are plenty of excellent examples and lots of links and ideas that can be put to use immediately. Definitely recommended, but be prepared for those little bits of language.

Coming up next: A Wahoo! Wednesday post. Oh, boy! I knew you'd be thrilled. At the moment, though, I have to go pick up the kiddo from school. Later!
Posted by Bookfool at 8:12 PM