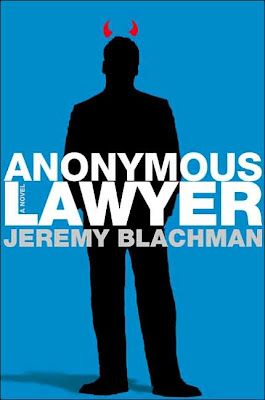 What led you to pick up this book? I read Kris' review of Anonymous Lawyer at her blog, Not Enough Books , last year, and it sounded great so I added the book to my wish list. I acquired a copy pretty quickly, but when I opened it up I thought the beginning was so funny that I actually closed it specifically to save the book for a time when I thought I really needed the upper. Note the pattern, here. I was on upper books, last week. Funny books = legal uppers. Okay, the legal part doesn't refer to the book, but it's kind of humorous that I stuck "legal" into the equation. This is especially funny if you're from another planet, as I am.

Summarize the plot but don't give away the ending. An obsessed, selfish, and wily hiring partner in a law firm begins to blog about his plan to someday become chairman of the firm and is eventually "found out" by two people who could either harm him or help him. The book is actually a mixture of his blog entries and emails to his niece and various people who discover his blog -- very nicely balanced. Not all authors can handle that kind of format well.

What did you like most about the book? It's so completely over-the-top that you can't help but laugh, even when he's talking about deliberately tripping a paralegal or insisting that the lawyers shouldn't have to share a water fountain with the people who do computer support or the technicians because who knows what kind of diseases those people carry. He refers to everyone by descriptive names: The Jerk, The One Who Missed Her Kid's Funeral, The Frumpy Litigator, The Musician, The Suck-Up, The Guy With the Bad Haircut, etc.

What did you think of the characters? They're actually quite believable. I took a paralegal certification course, a few years back, and thought it was a little surprising that the lawyers who taught the class managed to fit into the room with their egos. But, there are normal people in law, also -- people who are idealistically out to save the world and those who just want to make enough money to feed the family. He represents the whole spectrum well.

Share a favorite scene from the book: I'm just going to quote a fairly large section that seems representative of his typical patter:

Mentor. I hate that word. It's how they manipulate us into caring about them. If I'm your boss, I can make your life a living hell without spending a single instant worrying about what you're getting out of it or how it affects your "career development." (Career development. Another pair of words I hate). But call me a "mentor" and suddenly I'm burdened with having to think about you. I don't want to think about the Suck-Up as a real person. I don't want the responsibility of making sure that what I ask him to do is actually helping him. It's helping the firm. That's all that's supposed to matter.

We're a business. We're trying to maximize profits. If that means each year we take fifty law school graduates and burn out forty-eight of them before they turn thirty-five, well, that's what they're signing up for. We don't promise mentors.

What's the problem anyway? We're doing well. It's been almost seventy-five days without a work-related suicide.

In general: You have to read this book in the spirit that it was apparently intended: not specifically a parody of any other work (as far as I know) but more of a caricature, picking on the obsessions and excesses in the dog-eat-dog world of corporate law. Like Kris, the last post completely threw me, but then I realized that there were hints that the character couldn't admit to certain realities throughout the book and the ending is simply a continuation of those occasional tall tales that he inserted because he didn't want to admit the truth. You should definitely read it in order to figure out what the heck I'm referring to.

Another thumbs up. And, it's worth noting that Anonymous Lawyer is yet another book that began as a blog. The blog Anonymous Lawyer was, according to the book's slip jacket, "profiled in The New York Times and remains one of the most popular blogs on the web." The author was a recent graduate from Harvard Law School at the time the slipcover was printed; Anonymous Lawyer is a novel, not a memoir. Blachman has a newer weblog, which is also fun reading but about the real human, not written from the perspective of a fictional character. He sounds like a fun guy.

Totally off the wall: Did you know there's such a thing as a Space Weather Alert? And, that we're currently in the midst of one? Is it bad to spend all day raking your yard and sweeping your porch when there's a solar flare or is a geomagnetic flux simply something that makes your radio signal worse? I don't know. Actually, I feel bad for not knowing. I think I'll have to investigate.

What do you think about the following photo? If you looked down into my car, while you were working in some drive-through window, handing me a clear drink (because, of course, we don't drink anything that could stain the beige interior) would you freak out? Yes, of course I realize you're beyond the drive-through years, but that's not the point. Would you scream, thinking it was a real lizard or just laugh and say, "What a cute little plastic lizard!" 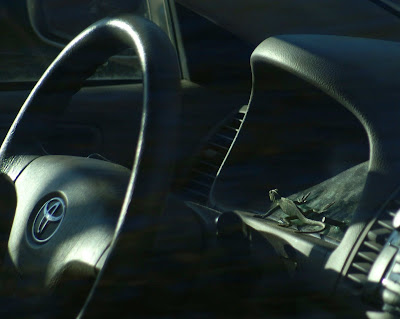 I ask these things because I'm sure a curious chick.

But, I have to go. Three more reviews forthcoming. I'll try to concentrate.

Bookfool, getting flippy
Posted by Bookfool at 7:40 AM