Waiting to Surface by Emily Listfield 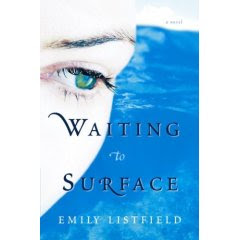 What led you to pick up this book? It's an Advanced Reader's Edition that was sent to me by Simon & Schuster.

Summarize the plot but don't give away the ending. Sarah Larkin has been separated from her husband for several months, but nothing could have prepared her for the phone call informing her that her husband, Todd, has disappeared while spending a week in Florida. As the police and Sarah do their own digging for the truth, the mystery simply grows. Did Todd die the night he disappeared? If so, was it a homicide, suicide or an accident? Is it possible he's still alive? Would he really abandon their daughter, the only person who apparently gave his life any meaning?

During the investigation, with time passing and few clues arising to explain what really happened the night Todd walked away from his former girlfriend's home, Sarah must come to grips with her own feelings and help her daughter accept the outcome so that they can both move on and learn to love, again.

What did you like most about the book? This is an introspective work of fiction based on real-life events. The author's husband did, in fact, vanish in Florida. He was an artist, like the fictional Todd, and the author (like Sarah) worked for a magazine. I think the fact that the author left those details alone made the book more interesting than if would have been if she had fictionalized everything. Peeking into the life of an artist was particularly intriguing.

What did you think of the characters? I never warmed up to Sarah. In fact, the one thing that jumped out at me the most as I read was a question regarding the protagonist -- why was the character who personified the author's experience so difficult to warm up to? A friend who wrote to the author after reading the book told me that she felt that the author kept a distance from her character deliberately. I assume that was because the experience was so painful, but it did make the book a little more of a trudge. I liked Sarah's friend and co-worker Paige, Sarah's best friend Lucy, and the private investigator.

Share a favorite scene from the book: I enjoyed all of the scenes in which Paige described her dating experiences. Paige lightened things up a bit.

In general: It took me about 50 pages to get into the book and then the reading went pretty quickly; it kept my attention and I can't say it was a book that I regret reading. However, I had difficulty with the fact that the story was based on real-life events but not an account of what really happened; and, the fact that I never warmed up to Sarah made it an uncomfortable read. I think I would have preferred a factual account, if only to keep away those nagging questions about where fact and fiction merged. The blend of dark, tragic story with characters like Paige (who would have made an excellent chick lit heroine) was a little bizarre, but I appreciated the character because she injected a little humor into a book that could have been merely depressing. I'd call this an average read: 3/5.

This is a catch-up post. I'm going to try to work my way backwards on reviews, for a while. Waiting to Surface was #18 for 2008 and the first book I recorded after my calendar went missing.
Posted by Bookfool at 11:24 AM