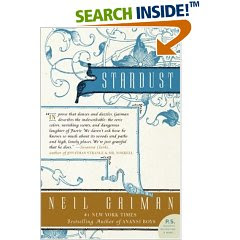 We are set in fast-forward mode, here. I spotted azaleas, forsythia and Japanese magnolias in bloom, today. These are April bloomers, so obviously Mother Nature is totally whacked up. But, that's another story. Since I've been an errand-running fool and have not had the time or inclination to do the major organization that's apparently required to locate the missing calendar, I'm going to start working my way backwards on book reviews. Hence, the review of Stardust, which I just finished reading last night.

What led you to pick up this book? It's probably all Chris's fault. Let's blame Chris. The truth, however, is that Stardust was the closest book to hand when I was stuck on the futon with a cat warming my lap.

Summarize the plot but don't give away the ending. I'll defer to the cover blurb on this one:

Young Tristran Thorn will do anything to win the cold heart of beautiful Victoria--even fetch her the star they watch fall from the night sky. But to do so, he must enter the unexplored lands on the other side of the ancient wall that gives their tiny village its name. Beyond that old stone wall, Tristan learns, lies Faerie--where nothing, not even a fallen star, is what he imagined.
. . . A remarkable quest into the dark and miraculous--in pursuit of love and the utterly impossible.

What did you like most about the book? I thought it was a well-wrought and very fun grown-up fairy tale with a decent blend of good versus evil, a rather likeable hero (if a bit too mild, at times) and a wonderful, adventurous setting. I loved the little town of Wall and its people. Actually, there's very little about this book that I disliked.

What did you think of the characters? Tristran was mild-mannered to the point that he was very close to being branded a wimp by yours truly, but he was tremendously courageous when challenged and the character grew in the classic way. I liked him. The star, Yvaine, was understandably grumpy (it would definitely hurt to fall to earth from the sky) and the interaction between the two was humorous and lively. The witches were easy to hate. Very well done, I'd say, Mr. Gaiman.

Share a favorite scene from the book: I'm quite fond of the scene in which Tristran is trying to convince Victoria that he will go anywhere and give her anything to win her hand:

"I would go to Africa, and bring you diamonds the size of cricket balls. I would find the source of the Nile and name it after you. I would go to America--all the way to San Francisco, to the gold-fields, and I would not come back until I had your weight in gold. Then I would carry it back here, and lay it at your feet. I would travel to the distant northlands did you but say the word, and slay the mighty polar bears, and bring you back their hides."

"I think you were doing quite well," said Victoria Forester," until you got to the bit about slaying polar bears."

All right, Gaiman fans, we're at 50/50, here. Neverwhere is going to be the acid test, when I get to it. Does she love Gaiman or not? She cannot yet say. But, Stardust is definitely a point in his favor.

Yes, yes, headaches and shorted out neurons and all that. Thumbs up.

Coming up . . . Wahoo! Wednesday. But, I have to go. Again. I love my new car and all, but sometimes I'd just like to be able to walk rather than hop into the car every whip-stitch because there are no freaking sidewalks, everything is miles of twisty roads apart and the loose dogs would happily take a chunk from either of my ankles (they did, in fact, once take a chunk out of the cat's hindquarters). This would be one reason I'd have stayed in England if I were Neil, but that's just me. Plus, I really like sheep and things like bits of Roman walls and castles.

Nobody actually knows where any of that came from. If you do not fear the crazy lady, feel free to return for some wahoos, later this evening.
Posted by Bookfool at 6:41 PM