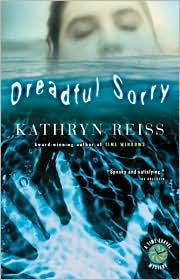 What led you to pick up this book? I was in the mood for something creepy but light. Dreadful Sorry is a young adult novel, so I knew it would be a fairly quick read that I could probably continue to concentrate on well enough to read between swim events, this past weekend (provided that I remembered to take earplugs to the natatorium). I assumed it would be suitably creepy because I've read one other book by this author and the other book was just spooky enough to please me.

Summarize the plot but don't give away the ending. ***Possible spoiler alert - not certain, but skip the next two paragraphs if you think you'll read this book. I may have given a bit too much away.***

Molly has been afraid of water for as long as she can remember, plagued by nightmares of drowning. She has no idea why she has the nightmares, as she's never had a bad experience or an accident in water. But when she comes close to drowning at a pool party and her mother still doesn't understand the depth of Molly's paranoia, Molly decides to visit her father and his young wife in Maine. With her father in charge, she can escape her mother's continued attempts to force Molly into learning how to swim.

In Maine, Molly is jolted by the discovery that her father's house is the setting of some of her nightmares and her visions begin to escalate. When Molly is repeatedly thrown into scenes of a past in which she is literally looking through the eyes of a young woman who lived in the house over a century ago, Molly decides to investigate. Who was Clementine and what does she have to do with Molly and the ancient house? In order to free herself from the memories of a ghost, Molly must figure out exactly why she's being haunted and what she needs to do to set Clementine to rest.

What did you like most about the book? This may sound strange, but what I liked best about the book was the story. I thought the novel was rather sloppily written, and yet the concept was quite fascinating -- the idea that Molly was seeing past events as they occurred through the eyes of the person who experienced them. I was sucked in and just had to know what was going to happen to Molly and Clementine. While I don't think a connection between Molly and Clementine was ever firmly established, I did reach the point that I felt it didn't matter.

What did you think of the characters? I liked Molly, although she kept herself distant from people because she was so disturbed by her visions. There was a sense that she would be fine, once she figured out the meaning of her mental jaunts into the past. Jared was another character who seemed to be driven by his own confusing glimpses into the past and whom I thought would turn out to be a decent individual in spite of one frightening incident. Molly's mother, Jen, was annoying. Her gentle father and bubbly stepmother were both likeable, sensitive characters and I was sort of relieved when they took over the parenting from Jen. Clementine was the kind of character who gets under your skin like an annoying itch. I understood her desires, but I still wanted to kick her in the shins.

Share a favorite scene from the book: I didn't mark any specific scenes or quotes, but I think the point at which I realized I was really going to enjoy the book was the moment when Jared dropped Molly into a swimming pool. At that point, it became obvious that there was something bizarre and spooky going on with both of them and they'd have to unravel the problem.

In general: A very interesting story that kept me enthralled in spite of average writing. I think the author has a talent for crafting a story but it did seem like this was a case in which the young adult audience may have possibly been an excuse for poor writing. Still, I enjoyed the book and recommend it to those who savor young adult historical fiction with the creepy factor thrown in. Thumbs up - I'd say about a 3.5/5.

Just walked in:
The Last Single Woman in America by Cindy Guidry - thanks to a drawing at The Hidden Side of a Leaf (and a Fed Ex man). Thanks, Dewey!!
Eat, Pray, Love by Elizabeth Gilbert (from Paperback Swap)
A bunch of ARCs - our library was giving them away, again!!! Photo in tomorrow's Wahoo! Wednesday post.

Number One Reason I Should Have Taken My Camera to the Library - Firefighters washing the truck at the firehouse next door -- one of my favorite sights. Taut young buns, tight pants . . . great combination and loads of fun to photograph (but you have to be sneaky).

Five Days till The Iditarod!!! Wow, it's difficult to believe there's a place where the ice and snow are still thick enough to race around on sleds (says a gal who goes outside to dance in the snow when there are flurries -- which happens maybe once every 2 or 3 years; yeah, we don't have a realistic viewpoint of winter, I know).

Best Lost Calendar News: I think I may have at least managed to piece together the titles of everything I've read in February, thanks to casual snippets about finished books at this blog (Blogging Saved My Life, film at 11:00) and the little book pile beside my computer. The calendar is still missing and I don't have all the usual info, such as number of pages read and copyright dates (some of which I'll have to look up, since the books have already been swapped or returned to the library), but at least I've got another calendar that I'm slowly filling in and I can function. Wahoo for that.

What do you think? Is it a sacrilege to paint over a poppet's natural coloring (meaning the decoration painted by artist Lisa Snellings-Clark)? I'm curious what you think, because one of my new poppets got chips in the paint on her skirts, after just a few minutes of bopping around in a bag with several other members of my Poppet Family. The other gals are just fine, but Choxie just doesn't look right with those white flecks. I think she got a Toyota 2003 paint job (I gave Toyota a severe chewing-out about that paint when they made the mistake of sending me a survey form about what I liked and did not like).

Smell I wish would go away: The scent of fabric softener coating my shoes because someone decided to do laundry while his wife was away, in spite of being told numerous times Do Not Do Laundry, and then that same someone whose name shall not be mentioned but whose identity is obvious because I'm only married to one guy left the fabric softener container open and precariously perched where a balance-challenged wife could easily knock it over. Yes, I confess to having a part in the Fabric Softener Disaster. But, really, he should know better.

Off to work on that blue puddly mess,

Bookfool in Mountain Fresh scent
Posted by Bookfool at 11:32 AM