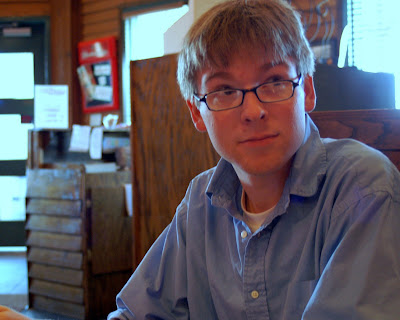 Most of my wahoo focus was intended to be related to the Saturday swim meet, today (because it was definitely very wahooey), but I have to throw in a big wahoo for the safety of my handsome eldest, who sat out the worst of yesterday's storms in a part of Memphis, Tennessee that was not hit directly by the tornadoes. He did see the formation of a tornado and many distant explosions, but wisely chose to stay put when he heard news that Midtown Memphis (where he now lives) was "getting socked" and someone's roof was in the middle of a road on his path home. Many grateful wahooey thanks to God for his safety and prayers go out to those who lost homes, friends and loved ones in Tuesday's terrible storms.

Bookfool, about to rush out the door to fetch the youngest.
Posted by Bookfool at 12:50 PM