Sailing Alone Around the World by Capt. Joshua Slocum 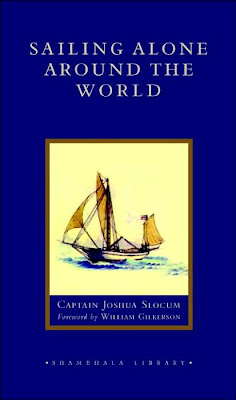 What led you to pick up this book? It was a total impulse purchase, which I happened across whilst browsing in the ever-dangerous Borders. Fortunately, it was 50% off the cover price and I had a gift card. So, it actually doesn't exist because I spent no money on it. Well, I can pretend if I want to.

Summarize the plot but don't give away the ending. Sailing Alone Around the World is the personal account of the first man to sail around the world alone, literally. What a giveaway title, eh? I won't cause you any difficulty by revealing the ending because it's so obvious. Had he not survived, we wouldn't have the book to read, now, would we?

What did you like most about the book? I loved Slocum's dry sense of humor and wit. I was impressed with his fortitude, quick-thinking in times of danger and his superb nautical skill, as well as the historical backdrop. His journey took place between April of 1895 and June, 1898 -- a time period during which people carried letters of introduction and sailors were a part of a global network which, I think, certainly tops that of our modern life because people actually spoke to each other, invited strangers for dinner and lodging based on the written recommendation of a common friend, and were often stunningly generous. Several acquaintances of Slocum chipped in to pay harbor fees or replace Slocum's equipment without any obvious ulterior motive.

What did you think of the characters? Amazing. Slocum was an interesting man with a tremendous sense of humor, very worldly and adventurous. The people he encountered were largely friends, natives (for better or worse) or villains. There was a distinctive color, flavor and imagination to each place he stopped. The world and its people were fascinating in the late 19th century.

Share a favorite scene from the book: This book is crammed full of adventures, but one of my favorites was the scene during which Slocum was chased by pirates after leaving Gibralter and another was the description of the real-life castaway upon whom the tale Robinson Crusoe was based and whose cave Slocum visited. I marked numerous passages, but I'll quote a few that I think are representative.

At this point in my dilemma Captain Pedro Samblich, a good Austrian of large experience, coming along, gave me a bag of carpet-tacks, worth more than all the fighting men and dogs of Tierra del Fuego. I protested that I had no use for carpet-tacks on board. Samblich smiled at my want of experience, and maintained stoutly that I would have use for them. "You must use them with discretion," he said; "that is to say, don't step on them yourself." With this remote hint about the use of the tacks I got on all right and saw the way to maintain clear decks at night without the care of watching.

Difficulties, however, multiplied all about in so strange a manner that had I been given to superstitious fears I should not have persisted in sailing on a thirteenth day, notwithstanding that a fair wind blew in the offing. Many of the incidents were ludicrous. When I found myself, for instance, disentangling the sloop's mast from the branches of a tree after she had drifted three times around a small island, against my will, it seemed more than one's nerves could bear, and I had to speak about it, so I thought, or die of lockjaw, and I apostrophized the Spray as an impatient farmer might his horse or his ox. "Didn't you know," cried I-- "didn't you know that you couldn't climb a tree?"

The wind was still southwest, but it had moderated, and roaring seas had turned to gossiping waves that rippled and pattered against her sides as she rolled among them, delighted with their story.

My time was all taken up those days--not by standing at the helm; no man, I think, could stand or sit and steer a vessel round the world: I did better than that; for I sat and read my books, mended my clothes, or cooked my meals and ate them in peace. I had already found that it was not good to be alone, and so I made companionship with what there was around me, sometimes with the universe and sometimes with my own insignificant self; but my books were always my friends, let fail all else.

In general: Sailing Alone Around the World (at least, the copy I own) is not annotated and there are large passages written in nautical language thick enough to puzzle all but the seasoned sailor. I looked up some terminology and read between the lines, so to speak, at other times. The book is such an entertaining read, full of pirates and danger, adventure and even silliness (Captain Slocum liked to refer to himself as "the crew") that it's wonderful as is. But, it would be even better if the language was explained through notes or a glossary and his travels were put into historical context.

Yet another thumbs up. I loved this book and it will be squeezed onto the good shelves, shortly.
Posted by Bookfool at 10:46 PM