The World According to Mimi Smartypants 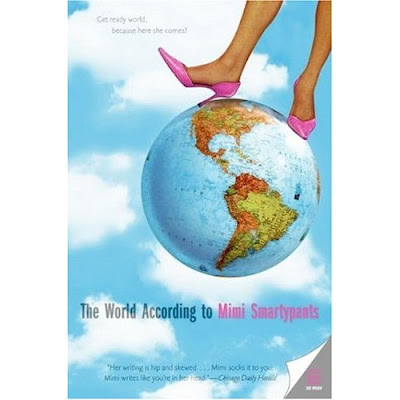 What led you to pick up this book? I happened across Mimi's blog, a couple of years ago and used to subscribe to her feed. She's irreverent, sharply observant, smart and often side-splitting funny. Of course, I wanted to read her book.

Summarize the plot but don't give away the ending. No plot; this one's actually just a compilation of some of her blog entries, with an opening note from the author and a "Little Black Book" (more notes by the author) describing how the book came about following the closing entry.

What did you like most about the book? "Mimi" is just so darn funny. I don't know how anyone can possibly stay friends with her without investing in some sort of bladder-control garment. I didn't mark the funniest anecdotes because, you may recall, I read it during that weekend that I could barely move my eyeballs and I just couldn't be bothered to reach out for a post-it note. But, anyway . . . here's a sampling:

I made a llama puppet (it's a long story) and I wanted the llama to be able to see Al Gore. I stuck my arm up in the air so the puppet could look out over the crowd, and I learned that the Secret Service really do not like it when you show a puppet to someone they are protecting. No tackling ensued, but two of the guys moved over to get a better view of me and stayed like that for the rest of the remarks. My sister and I developed a fondness for the Secret Service and decided that we want to get some old phone cord and make fake curly ear wire things for ourselves like the ones they have. It looks really cool.

What did you think of the characters? The "characters" are Mimi, her husband, her friends, her co-workers, the subway crazies, and anyone else she happens to observe. I love reading about them, but I think in real life "Mimi" would terrify me.

Share a favorite scene from the book: The August 21 entry about why you should not take yourself seriously describes a time when Mimi was in college, had "dropped a large amount of acid with friends" and was in "Introspective Mode". She decided that there must be some important, illuminating message in the patterns in the snowflakes she observed, coupled with the drug-induced colors . . . and concentrated. While she was watching, the patterns resolved themselves into the shape of Astro, the dog from The Jetsons. Her comment:

So while I don't discount the validity of anyone else's Moment of Clarity, drug-induced or otherwise, make sure you take a second to reflect and ascertain that you are not simply being a pretentious dork. I consider that particular hallucination a sort of warning signal from my brain that things were getting a little too pompous and serious up there.

I found this particularly funny because of a friend who swears she saw Jesus in her alarm clock during a similar drug-addled haze. I had a little trouble keeping a straight face when she got to the part about shaking the clock because she really just wanted to know what time it was, but Jesus wouldn't go away. Apparently, he got the message across.

In general: I loved this book but it's definitely not family-friendly. The World According to Mimi Smartypants is a no-holds-barred, honest account of what one woman (who, I think it's important to add, doesn't want to be identified) has seen, heard, thought, and experienced, while living in Chicago and riding on local public transportation. Her language can be extraordinarily offensive; some of her anecdotes made me blush. And, I was at home, alone, so it's not like anyone could accidentally read an embarrassing section over my shoulder. I think she's hilarious, though, and the book was perfect for the moment; I actually saved this book specifically for a desperate-I-need-an-upper week.

Still don't feel like rating books with numbers, but thumbs up. Check out her blog to see if you like her style and can stomach her blunt humor. I have a feeling she'd love that towel in last week's Wahoo! Wednesday post.