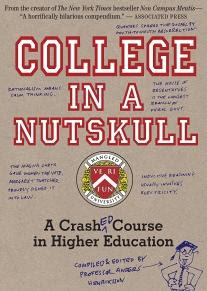 I have a vague idea (actually, it could probably be better termed a wild-eyed guess) how College in a Nutskull may have landed on my doorstep, but I can't say for certain so we're just calling it a lovely surprise gift. And, boy, what an entertaining surprise book it turned out to be.

College in a Nutskull: A Crashed Course in Higher Education is a humor book that contains funny, erroneous bits culled from essays written by college students around the globe. Some, I suspect, were written by students attempting to be clever (and succeeding) and others were simply hilarious mistakes. On the day the book arrived, my son and I went out to eat at the local Mexican restaurant and took turns reading to each other. Here are some of my favorite quotes:

The Assyrians were a ruthless society that would terrorize relentlessly and did so very tactfully.

The search for peace in the Gaza Strip failed because both sides do their forwards thinking while looking backwards.

The Balkans continue to be very inappropriate. The region is like a mince meat pie where the raisins don't like the meat and the mince wants to kill the fruity bits. Ethnic clenching spelled 'The End' for Yugoslavia. This was another case of old whine in new bottles.

During the twentieth century socialism went from a group of ideas heated up in a crackpot on the back burner to one that took over the whole kitchen.

The book disappeared after I finished. That's how things work in this house. If I happen across a really funny book, the kiddo makes off with it and I'm lucky if I ever see it, again.

College in a Nutskull is spiral-bound and loaded with little fake doodles that make it look like the interior of a notebook. It also includes photographs and illustrations of the actual people or events students have botched up. The cover of mine came a little unmoored from its metal binding, so I'd rather it was bound traditionally but: a.) I'm sure it can be fixed, and b.) Who knows if I'll ever see it, again? So, I don't suppose the binding matters all that much.

We enjoyed College in a Nutskull so much that I got online the minute I finished and ordered the first of Professor Henriksson's compilations, Non Campus Mentis: World History According to College Students. Once again, I laughed my butt off.

is hardbound (at least, the copy I ordered from Paperback Swap is) and it's slightly smaller than College in a Nutskull. Along with photographs and illustrations, excerpts are written on fake Post-It notes and there are several pages of side-splitting student-labeled maps, plus a post-script and a quiz in case you think you're a history expert, in the back. Boy, that quiz put me in my place.

If you're looking for some books that will make you laugh, both of these books are excellent. And, don't forget Dave Barry's new book. I've had an awful lot of fun reading, lately.

My thanks to Workman Publishing for College in a Nutskull!