Spaceheadz by Scieszka and Prigmore - Book 4 for Children's Day 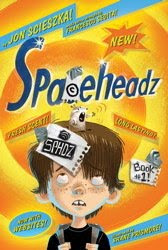 Michael K. is new at P. S. 858, and so are two other children, so they're all stuck at the same table. Michael K. is nervous enough, just being new. But, the new kids are really, really weird. They're aliens and their job is to convince 3,400,001 children to be SPHDZ. If they don't succeed, Earth will be "turned off".

Michael K. resists. He doesn't want to be associated with those two weirdos and their hamster, but he's eventually convinced that they are, in fact, aliens. They've received TV signals from earth and, as such, communicate by spouting out advertisements.

Meanwhile, Agent Umber of the Anti-Alien Agency has been alerted to the detection of an Alien Energy Wave and is sent to investigate. Maybe if he catches an alien, he'll get to change his code name to a better color, like black or gray or tangerine.

Spaceheadz is the first in a series, so Agent Umber will undoubtedly keep bumbling along for a while, trying to catch the elusive aliens. It's possible I'm a little too old for this kind of book, but it's funny and I enjoyed it. The only thing I disliked about it (besides the fact that Spaceheadz is frequently abbreviated to texting form: SPHDZ) was the sentence fragments. There are lots and lots of fragments --to the point that they totally lose impact and become simply annoying and, at times, confusing. Again, I think that just might be because I'm getting old. I don't even text, so I'm annoyed by fragments and abbreviations.

But, I doubt that would bother most children and I am certain both of my sons would have really enjoyed this book when they were the right age.

4/5 - A nutty beginning to a series that youngsters will love, with terrific, goofy illustrations.

Spaceheadz is scheduled for release on June 22. I'm jumping the gun a bit because I still have quite a large catch-up stack to review.

This is Book #4 for Children's Day. One more to mention and then I'll stop for the day.
Posted by Bookfool at 3:54 PM