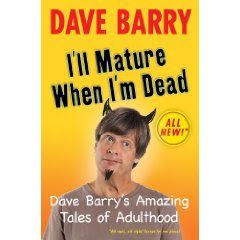 I can't quote from this book because my son keeps running off with my copy and I'm not sure where it is, at the moment, but if you like Dave Barry just stop right now and go get a copy, okay? I'll wait. Here's an Amazon link that doesn't benefit me in any way. At the moment, I'll Mature When I'm Dead is very reasonably priced at Amazon.

While I'm waiting, I must tell you that Dave Barry and I go a long way back. He doesn't know that, of course, but my father and I were big fans of Dave Barry back in the 1980s and the last book I bought my father was oddly apropos: Stay Fit and Healthy Till You're Dead. Hmm, I guess Dave Barry is oddly focused on death. Anyway, my father and I exchanged Dave Barry books and/or bought them for each other as gifts; and my father did, in fact, stay fit and healthy till he was dead (he died of the latent effects of a head injury). It took a few years before I could even look at a Dave Barry book, after his death, but I did eventually move on with my life and returned to good ole Dave.

All right, now for those of you who didn't bother rushing out to buy I'll Mature When I'm Dead, I'll share why you should change your mind. The essays in this book are mostly about being a father and growing older and they're snicker-worthy to double-over funny, depending on the essay, but my two personal favorite portions of the book are not essays but parodies. One is a parody of Twilight, which is so dead-on (haha, very punny) that it's a wonder my bladder held out while I was reading it. The other is a script-style parody of a 24 episode. I read portions of that to my husband and then I handed the book to my son and suggested he read the 24 parody first. Well, I've briefly seen the book since. Let's just say the entire family has been enjoying this one.

5/5 - Tickled my funny bone so thoroughly that I had to reach for the Kleenex box because I had tears of laughter streaming down my face. If you're a female, don't read this book until you've removed your makeup (and I'd advise using the restroom, first). Everyone else: I wouldn't read it while eating because you might choke and, for heaven's sake, don't read it in bed if you've got a spouse trying to sleep on the same mattress because he or she will not get a wink of sleep. Prepare to make a fool of yourself if you read it while riding on public transport.

Well, I think it's that funny. But, I always did love Dave Barry.
Posted by Bookfool at 5:31 PM