The Queen of Palymra by Minrose Gwin - A DNF post 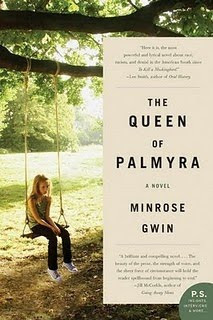 The Queen of Palmyra is a book set in Mississippi. Often, I'm totally unable to get myself to read books set in the Deep South, simply because I can't bear to read about the heat when I'm living through it. This year has been a really cold year for us, though, so when I read a blurb about the book I thought it sounded like a good story and I figured I could handle reading about Mississippi, for once.

Here I defer to the cover blurb because I didn't get far; I'll tell you why, in a minute:

Florence Irene Forrest lives in Millwood, a segretated town like any other in the South in 1963. Florence's father is a burial insurance salesman with dark secrets. Her mother is stuck in a marriage far from her educated, liberal upbringing and makes secret trips to the local bootlegger.

This leaves Florence with her grandparents' longtime maid, Zenie, named for Zenobia, Queen of Palmyra. As Florence spends time in Zenie's home, she sees how race truly divides her town, but nothing prepares her for what happens with the arrival of Zenie's niece, the vibrant college student Eva Greene. Soon Florence, who has moved fluidly between two families, between two races, finds herself stuck in the middle, a witness to the brutality and the truth of her times, in Minrose Gwin's astonishing and moving novel.

Okay, so . . . I made it to page 38. At that point, Florence was still at home. We'd been introduced to her mother's interesting bootlegging habit and her father's dark secrets, which center around a mahogany box crafted by his grandfather. What's inside the box? Doggone it. I may never know. I was finding the book engaging in many ways and the dialogue is absolutely spot-on. There's no doubt Minrose Gwin is familiar with Mississippi.

So, what was the problem? In one word: roaches. I can't stand to look at the word, so just highlight it to see what I said, okay? The author's writing is heavy on similes and I must admit it is a bit overdone, but I was fine with it except for the fact that she kept mentioning roaches -- both the reality of them (and, believe me, they're just a fact of life in Mississippi) and nasty bug similes.

We call them "monsters" in this house because even uttering the word can give me nightmares, so that's what I'm going to call them, from now on. At one point, I told myself that I was going to quit if the author mentioned "monsters" one more time, before page 50. She'd mentioned them 3 times, by that point. I overruled myself because I was enjoying the story, but when I hit 6 mentions in 38 pages, I said, "That's it," and closed the book.

I hated to quit, but that's one thing I just cannot read about. Two or three mentions are pretty much the limit. Seriously, nightmares aren't worth it. I asked around to see what other people thought and Softdrink said there is a graphic scene "with monsters" (she nicely took up my wording) later in the book. If you can handle reading repeated similes and references to "monsters" and like reading about the Deep South in the 1960s, this might be the book for you. I really did hate to give up on it because I liked the atmosphere and I was curious what was going to happen, what was in that mahogany box, etc. But, I work hard to keep bugs out of my life; that's what the bug guy is for. I won't be giving this book a second go.
Posted by Bookfool at 11:33 AM